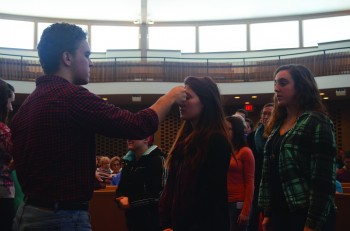 Unlike past years, when chapel services and convocations were held on Mondays and Fridays, this Ash Wednesday lined up with a college-sponsored chapel day, and Revive Indiana founder and CEO Kyle Martin was asked to speak at the event. According to Bob Yoder, campus

pastor, it was the most flexible chapel date this semester, which led to Martin’s being asked to speak at the request of several students.

The chapel service began as Bobby Switzer, senior, led students, staff, and community members in singing “Christ, Be Our Light,” accompanied by musicians from the student body. As the Christ-light candle was lit, an explanation was given as to what Ash Wednesday is. For those unfamiliar with the concept, it marks the beginning of the forty days of Lent, a time of
fasting, prayer, and abstaining from such things as desserts, meat, and, in the modern age, technology. This tradition, which began in the eighth century C.E., commemorates the forty days Jesus spent fasting and praying in the desert. It is used as a time for Christians to remember
that though they are mortal, God is among them.

Martin, who was raised in Middlebury, Indiana, attended the Church of the Brethren growing up. He said that seeing the blue hymnals used in worship were a part of what makes coming here “feel like home.” While at Taylor University, Martin felt that he had been called to
service, to such a degree that he ended up “putting it before anything else.” He spoke on how he felt that his career in sports and interest in making money to serve others had superseded what was most important

“I was so driven about serving others, I forgot about Christ,” said Martin. In his speech, Martin spoke of the Goshen College motto, Culture for Service, and the five core values.

“None of that happens unless you become Christ-centered,” said Martin. He urged people to turn to Christ instead of attempting righteousness through works, despite their importance.

According to Martin, the whole purpose of Ash Wednesday is to “turn back to the LORD,” and he quoted Psalm 51:10, asking that God create a clean heart in his listeners.

He ended by saying, “When you have freedom, folks, you’re going to do
exactly what God want you to.”

When Martin concluded, those present were called to receive ashes on their foreheads or hands as a sign of contrition and new beginnings, Switzer led in four songs as people streamed forward to receive crosses made from the ashes of last year’s Palm Sunday palms, and a reminder that “of dust you were born, and to dust you shall return.”

Karina E. Flores, a student who helped organize the event, said that people “had their hesitations” because of differences in denominations, but that she thought people were really engaged once they got on board.

Cheryl Kyser, a community member who has attended Revive Indiana, spoke
of the movement and said, “It’s just amazing to see how God has broken down walls between denominations and united us all for one cause in Christ.”