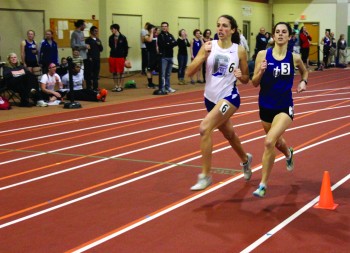 Mollie Nebel, a senior, passes by an opponent during the Defiance winter open this weekend.

This weekend, the Track and Field team sent all members but its racewalkers to Defiance, Ohio, home of the Yellow Jackets, to compete in the Defiance College Winter Open event.  The DC Winter Open took place on Friday.  The Maple Leaf racewalkers, on the other hand, competed in Goshen’s own Maple Leaf Indoor Race Walk on Saturday.

Friday in Defiance, senior Jordan Smeltzer continued his successful season with a first-place finish in the 3,000 meter run with a time of 9:11.62.  Fellow senior Alejandro Rodriguez finished just behind Smeltzer with a time of 9:12.26.  Senior Kyler Lehman also had a strong performance at DC.  He finished second in the men’s 200 meter dash with a time of 23.77 seconds and won the triple jump with a jump of 40 feet, 9 1/2 inches.  Junior Tim Lehman missed a first-place finish by just one-hundredth of a second in the men’s 400 meter dash, finishing in 52.67 seconds.  First-year Jill Steinmetz won the woman’s 800 meter race with a time of 2:26.65.  Both the men’s and women’s 4×400 meter relay teams earned second place.  The men, sophomore Luke Graber, sophomore Luke Kauffman, Tim Lehman and first-year Alex Oberlin finished in 3:48.46.  The women, sophomore Janeth Vela, first-year Lena Charles, senior Mollie Nebel and Jill Steinmetz, finished with a time of 4:29.30.

In Goshen on Saturday, the racewalking team was also very successful.  Junior Abby Dunn won the 3,000 meter walk with a time of 14:55.02; this time was the third-best in the country this year.  Sophomore Kayla Gray finished fourth in the same event with a time of 15:21.68.  For the men, senior Mitchell Brickson finished third overall and first among collegiate competition, turning in a time of 13:52.20.  This solidifies Brickson as the no. 5 seed in the NAIA national championships that will take place in three weeks.

A full list of results can be found on GoLeafs.net. The GC track team only has one more scheduled meet, and it will take place at NCAA Division III Trine University in Angola, IN on Saturday, the 21st, but it will not include any race walking events.