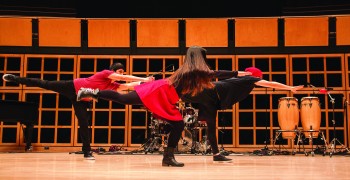 The Lyrical Hip-Hop Club is a new student club on campus where students can learn and practice dance.

Olivia Ginn, a junior psychology and ASL double major, started the club this past fall semester. Ginn has participated in numerous Kick-Off dance acts in the past, even winning second place in the fall of 2014 with junior dance partner Jose Mendoza. Following her success in Kick-Off, Ginn was approached by several students about learning dance.

“I realized that there wasn’t a club on campus directed towards hip-hop dance,” said Ginn, who then took the opportunity to start the Lyrical Hip-Hop Club. “It is mostly about getting a different style of dance into Goshen College—adding to the diversity.”

The group meets almost every Wednesday night at 8:00 p.m. in Newcomer 19. They typically start with a 15-minute warm-up before diving into the choreography.

“Whenever there are newcomers I make it a point to vocalize that the club isn’t about who’s better or who’s worse, who has the most talent or who can pick it up the fastest,” said Ginn. “It’s about getting together, having fun, hanging out and making new friends.”

Bekah Schrag, a first year, is one of the students that regularly attends the club.

“I did a year and a half of dance at a studio before this. At first, to come to Goshen and not have any dance was really obnoxious—and then [Olivia] started this club.” For Schrag, the club is one way she can relax and relieve stress after a long day of class.

A common misconception about this club is that people who haven’t had past dance experience are not qualified to come, but both Ginn and Schrag disagree. According to Ginn, those interested should come anyway because the group isn’t about intense skill, and the choreography is catered toward beginners.

“You might look foolish at times, but everyone has to start somewhere,” said Ginn. In fact, even with her dancing background, this is the first time Ginn is tackling lyrical hip-hop.                     Right now, the group is learning choreography for a dance showcase that will be happening on April 18th in the Umble Center. And like other dancers on campus preparing for this event, Ginn couldn’t be more excited.

“Just like any other performance on campus, dance takes a lot of energy, collaboration and work, and I just hope that people appreciate that via the dance showcase.”

If anyone wants to join the Lyrical Hip-Hop Club they should come sooner rather than later because the meetings are focused on preparing for the dance showcase. However, after the showcase, the club will learn new choreography on more of a weekly basis.

“It’s rewarding watching other people execute my choreography that I took the time to make,” said Ginn. “It may not seem like it, but coming up with your own stuff is hard.”

In order to appreciate the work that the Lyrical Hip-Hop Club and other dance clubs are doing, make sure to attend the dance showcase on April 18th at 9 p.m.