Winter One Acts shake up roles in GC theater department 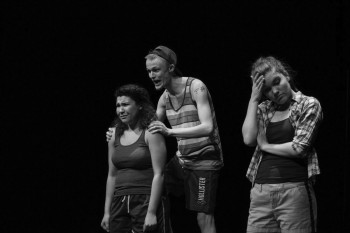 Christina Hofer, junior, stands with Ally Medellin, sophomore and James Lang, a first-year during the Winter One Acts rehearsal

This weekend, the Goshen College Theater Department will be putting on three one-act plays: “Miniature Migrants,” “Reality TV Island,” and “Confianza.” Students from many disciplines have been working hard to put together this show that includes both comedic and serious moments.

According to Martin Flowers, junior theater and music double major and stage manager for one of the plays, “all the plays are written, directed, stage managed, acted and designed by students.”

Doug Caskey, professor of theater, sees the Winter One Acts as “a vital part of GC’s educational theater program providing students with the opportunity to further develop skills in both leadership and collaboration.”

According to Caskey, this year’s One Acts are especially exciting because they are student-written. This has not always been the case in years past. Using student-written plays gives more students the chance to be involved, especially those who haven’t participated in theater at Goshen before.

Kolton Nay, a senior English writing major, is grateful for the chance to debut his writing through the medium of theater.

“This is the kind of writing I hope to do for a long time, in all kinds of different media outlets,” said Nay. “I’m excited to see how my first try goes over with the Goshen audience.”

Nay wrote the first play in the lineup, “Miniature Migrants.” He describes his play as an attempt at “transforming [his] passion for justice issues into a production for others to see.” The theme of “Miniature Migrants” is border crossing, and the two major characters are children, faced with the task of providing food for their family as they attempt to cross the border.

Senior Kate Yoder wrote the second play, “Reality TV Island.” The play follows a group of young adults on a deserted island as they grapple with a variety of tasks, some humorous and some serious. According to director Adrienne Schmucker, this play “highlights the tendency humans have to blindly follow the rules of society, and to push aside any voice of dissent.”

The third play is called “Confianza,” and was written by senior Angel Reyes. “Confianza” explores the topic of family life in troubled times.

Reyes, who is also directing and acting in this play, says that he hopes to express his belief that “when you have the right support and resources, the preconceived notion of ‘impossible’ can be made reality.” The title of the play, “Confianza,” is a Spanish word, which can be translated to mean “trust,” “hope,” or “confidence.” Reyes’ play, more than the others, incorporates community members and students who have not been involved in theater in the past.

There are many reasons to attend the Winter One Acts this coming weekend, but possibly the most unique is the chance to support a multitude of young people as they come together with their multiple areas and levels of theatrical expertise and perform a show.

Morgan Yordy, a first-year history and PJCS double major, agrees that “it’s great to pull people in that haven’t done much theater before beside some longtime veterans.”

The plays will be performed on Friday and Saturday evenings at 8 p.m. and also at 3 p.m. on Sunday. Tickets cost $5 and can be purchased through the Welcome Center by calling (574) 535-7566, online at goshen.edu/tickets or at the Umble Center Box Office an hour before the show. Volunteer ushers receive free tickets to the performance.