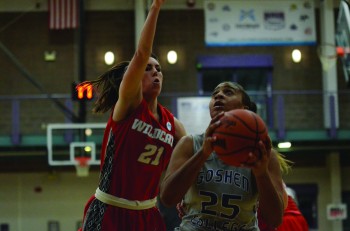 Keshia Ward, Junior, fends off a defender while going up for a shot during the Lady Leaf’s last home match against Indiana Wesleyan University

On Saturday, the Goshen women’s basketball team looked to avenge their January loss to Huntington, but it was the visiting Foresters who held on for a 63-52 victory.

While the final score might indicate that Huntington was in control, the game was far from one-sided. A heavily contested first half saw the lead go back and forth in the opening minutes. While the Foresters grabbed the lead for good with 8:27 left in the half, Huntington was unable to pull away from the persistent Maple Leafs. Junior Tyra Carver nailed a shot with 6 seconds remaining to pull Goshen within 1 entering halftime.

The second half was more of the same from the two determined teams. Neither allowed their opponent to go on any big scoring runs as Huntington’s largest lead for most of the half was only 5 points. With just over 7 ½ minutes to play, sophomore Lynnia Noel converted a contested layup and the following free throw to even the score at 44. A minute and a half later, sophomore Sophia Sears scored to give Goshen its first lead since early in the first half at 46-44. Moments later, Huntington’s Miranda Palmer put the Foresters up for good with a 3 pointer.  In the closing minutes, the Maple Leafs looked to make their opponents earn the win from the foul line, and Huntington did just that. 11 of Huntington’s final 19 points were from the charity stripe, as Goshen just couldn’t muster that final comeback bid.

Offensively, junior Jo’Mani Thomas led the way with team highs in points (14), rebounds (9), and assists (5).  Junior Keisha Ward added 11 points and 7 rebounds, while Sears contributed 11 points to go along with 3 steals. Carver added 8 points off the bench for the Maple Leafs.

The loss drops Goshen to 16-10 (7-7 conference) on the season. The Leafs look to break a 3 game losing streak this week as they head to Mount Vernon Nazarene University on Wednesday night and host Taylor University on Saturday afternoon.