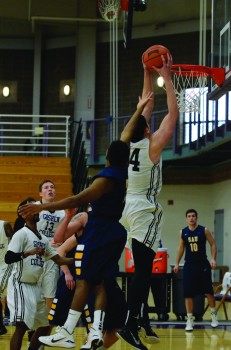 Trevor Commissaris, junior, goes up for a lay up during the home match on Tuesday.

The last time the Goshen Men’s basketball team played Mount Vernon Nazarene, the game came down to the final second as MVNU’s Eric Roby tipped in a shot at the buzzer to knock off the Maple Leafs 67-66. This time Goshen made sure Mount Vernon’s final shot wouldn’t matter. The Maple Leafs earned payback as well as a big conference win Tuesday night as they beat the visiting Cougars 85-77.

Mount Vernon scored 17 seconds into the game to take a 2-0 lead. It was their only lead of the night, which would only last a total of 11 seconds. With less than 2 minutes played in the game Goshen took the lead for good on junior Dominique Cartier’s 3-pointer. The first half provided 20 minutes of exciting, high scoring basketball as Goshen’s lead ranged from as high as 18 to as small as 3. Midway through the half it appeared that the Maple Leafs would leave Mount Vernon in the dust leading 32-14 with under 9 minutes to play, before the Cougars came back with a 17-8 run to close the gap to a 9 point 40-31 Goshen lead at the half.

The second half was more of the same, with Goshen jumping all over Mount Vernon for most of the half, extending their lead to a game-high 23 points with 6:34 remaining in the game. Again, Mount Vernon fought back in the final minutes and came within 4 points of the Maple Leafs with less than 40 seconds to play, before Goshen put the game away with free throws.

The Maple Leafs were led by juniors Dominique Cartier and Trevor Commissaris, who each had a team-high 18 points. Commissaris also led the team in rebounds with 5. Junior Dominique Bolden scored 14 points and grabbed 4 rebounds. Junior Brandon Demmings and freshman Devin Heath-Granger each added 11 points, as well.

With the win, Goshen improved to 15-12 (8-7 conference) this season and looks to take the momentum from their 2 game win streak into Upland, Indiana on Saturday to face Taylor.