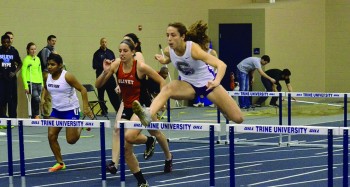 Mollie Nebel, a senior, leaps over a hurdle during the track
invitational at Trine University

The Goshen College track and field team had a strong performance at the Don and Riley Zimmer Indoor Classic. The event was located at Angola, Ind. and hosted by Trine University. This event gave Goshen College some good news as a school record fell and a Maple Leaf athlete won her event in her second career race.

At Trine, senior Mollie Nebel set a new school record after taking the third place overall with 1:01.81 in the 400-meter dash. Nebel improved the time 1.32 seconds of the mark that she set last week at Findlay, Oh. Nebel ran again in the women’s 60 meter-event hurdles and she finished fourth in 10.07 seconds.

In the women’s 60-meter, sophomore Melia Watkins and senior Alia Munley clocked in at 8.52 and 8.60 seconds respectively, getting the sixth and the eighth positions.

The first-year athletes also made a mark in their second meet. First-year runner Jill Steinmetz won the 600-meter race after finishing with a time of 1:44.27. Another first-year, Lena Charles, got the third and the fourth position in triple jump and long jump respectively.

The men’s success came from the seniors Alejandro Rodriguez, who took second in the 5000-meter run; Moses Kaelo, who was fourth in the mile; and Kyler Lehman, who claimed the third place in triple jump.

One of the men who competed, sophomore Vinicius Campos, talked about the meet at Trine University. “The team did really well in this meet, given it’s only the second meet of the season,” he said. “We had some personal bests, which is awesome.” Campos added, “Particularly, I did not so bad, I got a personal record in the 200m race, but there’s always the feeling that you can do better than that.”

Campos believes that pre-season was really important for the performance as he considers it “the best we had in a couple of years.” He said, “We introduced new stuff, and we are seeing the positive results right now. We started new workouts and got closer because a lot of people are coming from last season, and it creates more team unity.”

After getting one of his goals in the second race, Campos wants to have another personal record in the 400m. For the team, he said that they are working really hard so they have high expectations for this indoors season. “The main goal is to place higher in the Crossroads League and set the stage for outdoors,” he said.

The Maple Leafs will be back in competition on Saturday, Feb. 7, at the Raven Indoor Invitational hosted by Anderson University.