Reflections: Is there hope for the future? 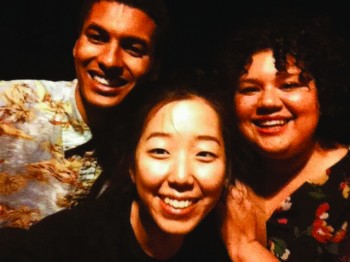 Sophomores Malcolm Stovall and Dona Park stand with Samantha Peña, a junior, at the Hope for the Future conference in Fort Myers, Florida.

With a rolling suitcase in hand, I felt the warmth of the sun’s rays kiss me on the cheeks. Although I had never visited Florida, I knew that this was it, far away from the harsh winter winds of Indiana. I, along with Goshen faculty members and two other students, found myself in Florida from January 25 to 28. Malcolm Stovall, a sophomore, Samantha Peña, a senior, and I were the first to represent student presence, along with other students from EMU and Hesston, at the fourth Hope for the Future Conference. This was a Mennonite diversity conference, where Mennonite leaders of different ethnicities and races gathered to identify and discuss problems of diversity and discrimination within the Mennonite community.

Initially, people were divided into caucuses: white, people of color and students. Later, the participants of the conference were divided into groups and walked through case studies that reflected our own experiences. Although I was surprised at this intentional division (namely, the division of white and people of color), I later recognized the benefit. Beyond the conference, we live in a world where people of minority have to struggle to have their voices heard in society where one culture is dominant. Here at the conference, space was created for minorities to be comfortable and share painful and enlightening experiences.

It was different, but a good kind of different, to be surrounded by people of color. Within the community, I recognized that minorities had gathered together and there was so much power in fellowship—we talked together, sang together and ate together. Here was a safe community where my status as Korean Canadian was recognized but not seen as a representation of my whole being. I was not a name off the diversity checklist or a face to represent the whole Korean community. I do take pride in being Korean Canadian, but here I was appreciated for the experiences surrounding my ethnicity and not for just my ethnicity’s sake.

It made me pause to reflect. Like the saying, “hindsight is always the clearest,” I was never aware of systemic racism that has attacked my family and me. Previously, I couldn’t point my finger at the problem; when faced with discrimination, I would feel horrible and confused. For instance, when other students wrinkled their noses in disgust after I had opened my lunch bag, I remember telling my mom I wanted “white people food.” My Korean heritage was like a disgusting aftertaste. My mom was obviously upset, and I felt terrible for making her upset. Still, at that time, I didn’t understand what was going on.

After the conference, I discovered the language to address and analyze these types of situations. What is it about having a dominant white culture that can pressure a person of a minority to assimilate? Why was it so wrong to bring Korean food? Or, a more direct question—why was it so wrong to be Korean?

I continued to reflect during and after the conference, and remembered the Martin Luther King Jr. Coffeehouse, the one single day at Goshen College that addresses racial discrimination. You might recall that I read a poem at the coffeehouse expressing my frustration of racial discrimination. I told the story of my family; while writing, I realized that my parents had to bear the majority of the burden, as they are first generation immigrants.

I was surprised at the stoic and serious expressions of the audience, especially when few people came up to me and spoke words of appreciation. I really did, and still do, appreciate your supportive words. However, what use are words and thoughts if they are not accompanied by action? Even if your parents have taught you to be respectful and appreciative of different cultures, how would I, a person who will always be a minority, know? Don’t be sorry for me or my experiences; they are mine and they make me strong.

Goshen College’s student body (yes you) needs to take a step forward in displaying active hospitality to create space for minorities. Saying “hello” while trekking across the layers of snow doesn’t cut it for me. Be the one to initiate conversation and invite others for food. Understand that developing relationships will be uncomfortable, but embrace the uncomfortableness.

The conference did more than just teach me a couple of words to point out discrimination. It taught me to redefine my identity—not only as a Korean Canadian, but as a person who bridges people of different cultures. It made me realize the importance of relationships created through active hospitality on both sides.