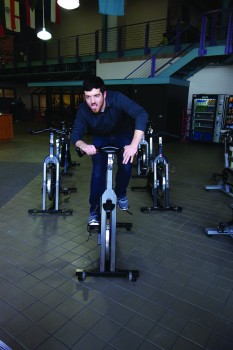 As you may have heard, January is the beginning of a new calendar year and a new semester here at Goshen College. If this is news to you, I imagine your repeated attempts to meet with last semester’s Ecology and Evolution class have been met with overwhelming frustration.

Many people think of a new year as a fresh start, a time for self-improvement or renewed discipline. Such hopeful feelings are often negated by the despair that comes with shattering your “No More Taco Bell” resolution by January 3rd. These same individuals also typically discover that January 4th is a difficult day, intestinally. Although The Record doesn’t typically endorse other publications, if the above story sounds familiar, I pray that you have since encountered some Reader’s Digest.

Students looking to be healthier in the new year have several great resources right here on campus. The RFC has top-quality weight rooms, racquetball courts, an indoor track and a room that used to contain a pool. And, when you’re finished exercising, there’s nothing quite as refreshing as a tall, cool glass of cucumber water over at the dining hall. There’s usually plenty available.

A new semester also comes with many new and exciting opportunities. It’s a new chance to procrastinate less, study more and not get (further) behind on Chapel/Convocation requirements.

For many first-year students, this semester is a new opportunity to make their Munch Money last longer than two weeks. Truly, nothing compares to the feeling of having a freshly-refilled Munch Money balance, ready for another semester’s-worth of White Caramel Mochas and Cream Cheese Brownies at Java Junction.

By now, you’ve also probably realized which set of fellow students you’ll pass on your way to class at approximately the same time and place every Monday, Wednesday and Friday for the rest of the semester. This includes that one person you kind of know but have never really talked to, so you’ll continue to just nod and smile weakly at them for the rest of the semester, or simply avoid eye contact altogether. These encounters are effective time-management tools as well, since you know you’re really late to class when you pass someone in the Connector who you usually pass at Schrock Plaza.

With all this potential for change in the new year, it’s nice to know that some things on campus will remain constant. There will always be squirrels and Ultimate Frisbee, swimming and snow creations in Schrock fountain, and with iPads and games of Age of Empires in the computer lab, just as there have been for generations.