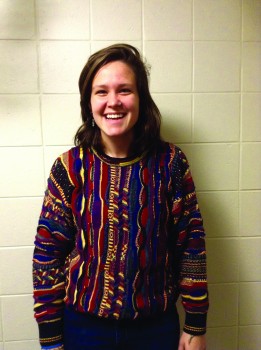 To be tasked with the opportunity to write an article for the Record about feminism within the context of Goshen College is extremely menacing and also terribly exciting.  I find it necessary to mention, before I begin, that I am a white, cissexual, able-bodied, middle-class woman who only has one perspective. Therefore, my understanding of feminism’s importance, although possibly valuable, is not the only viewpoint to consider. Only collectively can we create a reality of equality in our community.
That being said, here’s my take:
Goshen College is in a tricky spot. We’re part of a community that struggles with two incredibly pervasive misconceptions. First, pacifism—the belief that violence is unjustifiable and should be resisted—has been chronically confused with passivity and is held in very high esteem. Simply, people in this community, whilst claiming to be pacifists, are not prone to act out against perceived injustice. This passivity allows violence to continue, and is therefore inherently violent.

Secondly, general inequality is not considered violent, as violence is understood to be the physical act of harming someone or his or her property. However, I’m here to say that gender inequality is, in fact, violent. The reality that people support men’s athletics with much more enthusiasm than women’s is a violent claim about our communal values. The reality that women are socialized to be less assertive than men is violent as it leads to men’s thoughts, ideas, and perspectives being weighted differently than women’s—especially in an academic setting. The fact that 1 in 5 women will be victims of attempted or completed rape in their college career is overtly violent.

Although feminism is a difficult concept to neatly define, I generally work with the understanding that feminism is a struggle for equal opportunity for all genders. I would add that feminism is the struggle against misogynistic patriarchy (Misogyny can be defined as the hatred of femininity and women. Patriarchy, in this context, can be defined as white, male supremacy, or control of power). It is important to note that feminine traits are found in individuals of all genders—not just cissexual women. Therefore, inherent in this definition is the necessity to combat the binary understanding of gender.

Because there is clear gender inequality (yes, even here at Goshen College), feminism is needed to help resist injustice. Feminists are simply those who work towards gender equality—those who act to dethrone the patriarchal structure.
Therefore, feminism in this context works to combat our two common misconceptions—that pacifism is synonymous with passivity and that inequality is separate from violence. Feminism challenges passivity and demands active pacifism. Additionally, feminism acknowledges the violence in gender inequality and creates avenues for peacemaking.
In our community, feminism can be enacted in many, many ways. One simple way of executing feminism at Goshen College is to attend and support women’s sporting events. Another would be to actively honor and validate women’s voices and perspectives. Everyday, women’s perspectives are devalued in and outside of the classroom. Perhaps women are not actively silenced, but this occurs through the social expectations placed upon women. If you aren’t a woman, intentionally create space for women’s voices when women are present in the conversation. Additionally, educate yourself about gender issues that affect our community! Learn about which clubs and organizations are working towards gender equality and become involved! Finally, openly refer to yourself as a feminist if you believe in equality. There exists a stigma surrounding feminism, and you have the power to bring awareness about the actuality of the movement.
Gender inequality hinders all of us. Passivity in the face of inequality is violent. Let’s work for change through active feminism!