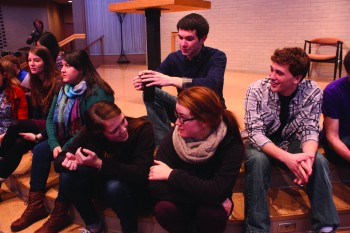 Today’s convocation from the fall 2014 China SST group began with pictures—some humorous, some sobering, and all depicting a culture widely different than our own.

The students wanted to present their experience in China in the most real way possible, using different presenters and stories to highlight the good, the bad and the confusing. They began by explaining the start of SST in Nanchong, where they studied the language, art and culture of the Sichuan Chinese. They even got to learn how to navigate traffic-crowded streets, some with more success than others.

The students then presented their service locations where they taught English to various numbers and levels of Chinese students.

“We taught English in three different schools,” Angeliky Santos, a senior, said. “Our experiences in the different service places were very different—our classes ranged from 50-80 students and 5-20 classes a week, all depending on what the teacher wanted or needed.”

The overview ended by explaining the travel portion of the trip which took place after service, where students saw the largest stone Buddha statue in the world, the Great Wall and Bejing, among other well-known sights. Descriptions of these locations set the stage for the personal anecdotes that the next presenters brought, beginning with adventures in cuisine.

“Food is one of the main reasons I wanted to go to China, and one of the things I liked most about China,” Grace Boehm, a junior, said. “Real Chinese food is so different from American Chinese food and varies regionally. The main ingredients in Sichuan include garlic, green onions, peppers, potatoes, vegetables and spice. Sichuan is a land of farming, so cheap and delicious produce is always available. Everyone will tell you we couldn’t eat a bowl of spicy noodles without breaking a sweat.”

All this produce did not exactly translate into healthy eating, however, as many of the China SSTers experienced.

“My host brother described the food as ‘delicious but not healthy,’” Jacob Greaser, a senior, said. “Like hot pot, for example. Hot pot is social experience—you go out with bunch of people, put food in a pot of hot oil and take two or more hours to eat, with increasing spiciness with every bite. I ate a lot of things that looked…interesting…but that I never could get translated.”

As Greaser stated, the language was a difficult barrier for many of the students, who had only taken one May Term course in Mandarin prior to going to China.

“China is economically and politically one of the most important countries in the world, but most people, especially in the US, know almost nothing about the language,” Jacob Shetler, a senior, said as he explained the difficulty in using different tones for the same word. “For example, we knew three words that were ‘ma’ but had three different tones. The three different tones made the word mean ‘mother,’ ‘spicy’ and ‘horse.’ You don’t want to call your mother a horse.”

This confusion and complexity within the language and culture was a theme for the convocation. While the students told some wonderful, transformative stories from SST, many realistic stories about hardship, misunderstanding and frustration came out as well.

“I have always considered myself a mentally stable person,” read Michael Yoder, a senior, on behalf of Kiernan Wright, a junior. “But, two weeks in, I thought I was going to snap. I think it was because I had a complete lack of genuine interaction with other people because of the language barrier. It was almost dehumanizing and definitely lonely.”

Even in the midst of these struggles and obstacles, the students were able to establish deep connections with their families and with each other. The familiarity with which they simply sat together was evidence of the unity they needed to get through their SST experience.

“Utter confusion became a fundamental SST experience,” Reuben Ng, a senior, said. “We thought we could expect the unexpected but things can still catch you completely off guard. We learned that it doesn’t matter who you are or where you are—some things you just won’t see coming. And I think that’s great.”