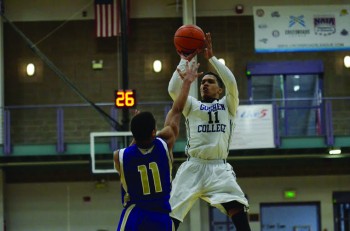 Stefon Luckey, senior, puts up a shot against a defender

On Tuesday, the men’s basketball team traveled to Marion, Indiana to take on the Indiana Wesleyan University Wildcats, who are ranked as the No. 1 team in the NAIA, Division II.  The scrappy Maple Leafs fought hard and kept the game close, never trailing by more than 11 points and were able to make it a two-possession game.  Unfortunately, they were not able to pull out the victory, ultimately losing 88-81.

IWU got the majority of their scoring from the trio of Lane Mahurin (23 points), Jonny Marlin (19 points) and Zac Vandewater (18 points); along with their double-digit scoring marks, Mahurin and Vandewater collected eight and seven rebounds respectively and Marlin totaled 12 assists on the night. Goshen’s scoring was more spread out amongst the team.  Seniors Stefon Luckey and Brandon Demmings lead the Leafs’ attack with 16 points each.  Sophomore Billy Geschke and first-year Conner Funkhouser both contributed strong minutes off the bench for Leafs’ coach Neal Young, scoring eight points apiece while Geschke also dished out four assists and Funkhouser grabbed five rebounds.

As the high final score indicated, neither team had much trouble completing field goals.  IWU held a slight advantage, outshooting Goshen 55.9% (33-59) to 53.4% (31-58).  IWU also shot better than the Leafs from beyond the three-point line; IWU was 12-25 (48%) and Goshen was 9-21 (42.9%).  Goshen won the turnover battle 13-15, but the most significant stat of the night came from the boards.  IWU out rebounded the Leafs 32-23.  The Wildcats also grabbed 10 offensive rebounds and held Goshen to just five.  One area where this game could have been lost for the Maple Leafs is second chance points.  The Wildcats scored 14 of their points after an offensive rebound while Goshen was held to only four second chance points on the night.

The loss drops Goshen to 12-9 (5-4 in Crossroads League play), while IWU improves to 20-1 (8-1 in the Crossroads League).  The Maple Leafs look forward to this Saturday, January 24th, when they will take on Spring Arbor University and look to get back on the right track.  Tip-off is scheduled for 3:00 p.m. in Goshen’s Gunden Gymnasium.