ASL students intern across the country 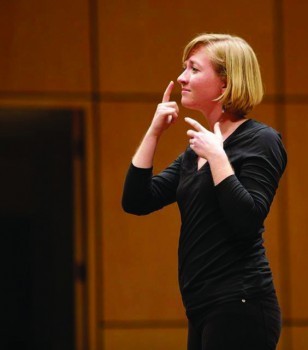 Brianna Brubaker, senior, interprets a song during the fall 2014 Kick Off.

In the last few weeks, senior American Sign Language (ASL) majors have dispersed throughout the country to complete their internship requirements. According to ASL professor Colleen Geier, these internships are the capstone of Goshen’s ASL program.

Finding an internship is an intense process. Students must develop resumes, make videos of themselves interpreting and apply to several agencies at once. Agencies can be as choosy as they want, so students need to be prepared for not necessarily getting their top choice. But once the students start their internships, the hard work begins to pay off. According to Mia Engle, one of four interns this semester, the internship “makes all the hard work worthwhile.”

Engle is working in Washington, D.C. She has been doing ASL interpreting for a variety of courthouses including the DC Superior Courthouse. She has also had the chance to interpret at numerous Smithsonian Institutes.

Engle has really appreciated the chance to ask questions and learn from those around her. She says, “I’m learning so much every single day.”

While all of the interns are enjoying their new locations, they are also facing challenges. For Engle, “the biggest challenge is that I’m now in a new city where I don’t know really anyone. It’s really hard not to have a community or friends.”

Brianna Brubaker, another ASL intern, is working in Phoenix, AZ, at Valley Center of the Deaf, an organization that supports people who are deaf as they go about daily life. Often the center’s interpreters need to know specialized vocabulary to be able to interpret legal situations and medical appointments. So far, Brubaker says she has enjoyed “meeting a bunch of new people, both deaf and hearing, and learning more about the medical industry.”

While Engle is enjoying DC’s highly developed public transportation system, Brubaker is getting used to the sprawling Phoenix area. She has had to get used to a lot of driving around to get where she’s going.

Sam Heberling, another intern, is doing her internship in Honolulu, Hawaii. She is enjoying exploring a new culture, but emphasizes that it isn’t all beaches and coconuts. She’s been working with an ASL interpreter named Sabrina, who has been an encouraging presence as Heberling gets used to interpreting on the island.

Heberling believes that Goshen College’s core values were a major factor in why Sabrina agreed to take her on as an intern. Apparently, Sabrina has turned down every application she has received in the past, but when she saw Heberling’s application, she decided to take her on. Heberling is very grateful for this opportunity. She says, “I am so thankful for [Sabrina’s] willingness to accept me because even in my first two weeks here, I have already learned so much.”

The biggest challenge Heberling faces is that Hawaiians don’t always speak in English. Sometimes they speak dialects and other times they speak Pidgin, which makes interpreting quite the challenge.

The fourth ASL intern this semester is Becca Niethammer. Niethammer is living in Hurst, Texas, but does most of her work in the Dallas-Fort Worth area. She is living with a host family, David (’70) and Janette (’69) Gerig, and she would like to give a “shout out to Dan Koop Liechty” for connecting her with the Gerigs, who are both Goshen alumni.

Niethammer is working for an interpreting agency called Hired Hands. There, she has encountered a diverse group of interpreters, and has found that people across many different specialties are willing to take time to help her improve her interpreting skills.

Like Brubaker, Niethammer has had to learn how to navigate the area where she lives by car and has already had some frustrating experiences with long commutes. She is learning to adjust to the driving habits of Texans, whom she has observed to be too fast-moving for her liking, though in fact Niethammer was born in Texas. She feels lucky to have family and friends within an hour of her current placement.

All four of the ASL interns are gaining valuable job experience. Geier says that while students in other programs may graduate with a degree in interpreting, they often are “[not] able to actually do the job.” Goshen students are consistently well-prepared after their interpreting internships. Often, GC students are offered jobs at the end of an internship. Last year, three Goshen ASL students continued working in the cities where they completed their internships. The ASL internship program is the reason that Geier can say confidently that “all of the students who have graduated since I’ve been at Goshen College have had no trouble finding jobs soon after graduation.”