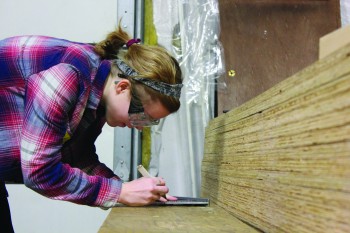 Kayla Gray, sophomore, measures out a line to make a cut while working for Habitat for Humanity.

An overwhelming amount of compassion and giving sparked the collaboration of Goshen College’s service club with Habitat for Humanity this past Saturday.

Habitat for Humanity, which provides homes for people in need, recently developed a need for more space at their ReStore, a donation center that sells new and gently used furniture, home accessories, building materials and appliances at a lower than retail price.

“They were [finding that they needed] to turn away large donations, because their building wasn’t large enough, which is really bad for an organization like that,” said Brianne Brenneman, sophomore president of Service Club at Goshen College. Because of this need they bought a new building, but it needs renovations.

Service Club’s faculty advisor and dean of students, Launa Rohrer, heard about the need, visited the space and connected with Habitat for Humanity’s coordinator.

After their meeting, Brenneman and Rohrer planned for Goshen students to assist with the project every Saturday in January (17, 24, 31) from 8:30 a.m. to 3 p.m. Last Saturday, 26 Goshen College students volunteered their time, finishing up drywall, peeling off old wallpaper and putting up shelving for merchandise. One group even built and put up a new wall inside the building.

“I enjoyed volunteering at Habitat for Humanity because I got to take a break from my studies and work with my peers in a much different setting than classrooms,” said Laura Hochstetler, a sophomore who volunteered last Saturday.

“Even after one day, everyone could see a difference,” said Brenneman. Besides GC students, there were also a few high school students and some adults volunteering from the community.

This isn’t the first time GC’s Service Club has collaborated with Habitat for Humanity. In past years, Service Club has helped with house builds over spring break, which they are looking to do in 2015 as well. Also, last spring, a $5 admission fee to Kick Off raised money for Habitat for Humanity. This tradition will continue at Kick Off this coming Saturday night at 10 p.m.

The same day as Kick Off, Jan. 24, Service Club will be helping to “paint the entire inside of the building,” said Brenneman. “Strong support on that day would be great.”

On January 31, the main task asked of volunteers will be to help with painting the trim of the building.

For more information or if you have any questions, email Brianne Brenneman at bfbrenneman@goshen.edu.