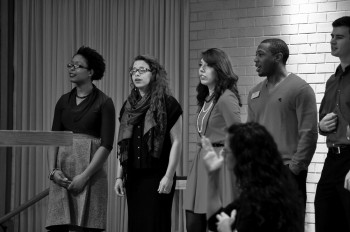 Dominique Chew, a senior, offers her own definition of justice in light of MLK Day

“The first thing you do is to forget that I’m black.
Second, you must never forget that I’m black.”
These are the first lines of Pat Parker’s poem, “For the White Person Who Wants to Know How to be My Friend.”
In times like the ones we’re facing today where racial tension is rampant–times that began and I’m not sure ever ended–friendship, and especially ally-ship, are necessary in working toward building a foundation to ending racial inequality. But first, we must acknowledge our
own privilege.
Recognizing our own privilege is imperative every day, but MLK Day may be a good place to start. Only then can we begin to move toward justice.
As Goshen College students, we’ve been fortunate enough to be in a learning environment that finds value in social justice. Our student body is actively involved in varying forms of protest such as attending the School of the Americas Protest in Ft. Benning, Ga. or organizing a peaceful demonstration at the courthouse to be in solidarity with the people of Ferguson, Mo. For this, I am so, so thankful.
So, as a woman of color, what does justice mean to me? I think of justice as equality and having a sense of moral rightness; a definition that I think many GC students can agree with.
See, I’m not sure that the definition of justice differs among people groups, among ethnicities, among nationalities. I’m not sure it differs between persons of color and conscious white folks, but with all of the recent events–specifically the Mike Brown, Eric Garner and Tamir Rice cases (but let’s not forget about all of cases that don’t make national news), persons of color are often elevated as being the voice for justice. Sometimes, that’s not a bad thing–raising the voices of people of color up in these situations is imperative–however, we cannot tokenize these voices.
I’ll be honest that being asked, as a woman of color, to write an article about MLK Day is in and of itself problematic. Listening to the voices of people of color, and validating our stories is not something that should happen just once a year. It should happen every day.
Designating MLK Day as the one day of the year that people of color are allowed to be angry is not just.
Allowing MLK Day to be the one day where it’s okay to talk about race is not just.
Giving people of color the spotlight on MLK Day, and no other day of the year, isn’t just because racial injustice is not something that happens a few times a year. It happens every single day.
So, I encourage us to use MLK Day as an opportunity to gain an understanding about how to talk to our sisters and brothers of color about race, and let these conversations happen throughout the year. And when the on-going battle of racial inequality in this country rages on, learn to share our burden; learn to ask questions, respectfully; remember that Martin Luther King Jr. paved the way for change, but we aren’t there yet.
The work of the world lies before us. Accomplish justice, with grace.