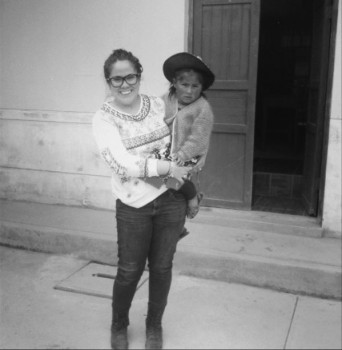 rances Fonseca, a sophomore stands with Brizaida, her sponsored child

Briziada, 5 years old, makes a two-hour trek down a mountain in Ausangate with her 4 siblings and parents to the area World Vision project office. At the same time, Frances Fonseca, Goshen College second-year, stomach filled with butterflies, bumps along the three hour ride between that office and her host home in Cuzco.  Fonseca, on Peru SST, was spending the six-week service portion working for World Vision.

World Vision is a Christian nonprofit that began in the 1950s and focuses on the well being of children around the world.  The organization uses a sponsorship system to raise money that improves the education and health of the local community. A portion of the mission statement reads,“ [World Vision is a] transformational development that is community-based and sustainable, focused especially on the needs of children.”

Fonseca’s first couple days with World Vision were filled with office work but lacked the tedium Fonseca feared would accompany the tasks. After requesting that her SST leaders place her at a location that utilized her bilingual skills, Fonseca dreaded the possibility of days occupied with office tasks. However, after spending the initial days reading up on the mission of World Vision and translating mail that passed between sponsors and their sponsored child, Fonseca came to feel the same passion that her coworkers did.  “Everyone around me was so passionate about the work they did; they were happy to come to work in the mornings,” she said.

In the second week, Fonseca’s boss Patricia Pacheco began finding ways for her to be involved in the fieldwork.  Fonseca visited various locations of the 6 area development programs and aided by facilitating interpretation when sponsors came to visit children, keeping records on the children with which the organization was working and passing out snacks.

“I went to many, many development communities for field work and fell in love with at least one child if not all of them every time,” Fonseca said. She also experienced firsthand the effect sponsors had on the program. Along with aiding in monetary ways to help shape a better future for the child, the sponsoring creates a bond.  “When a sponsor sends a child a letter, I could see the smile on that child’s face knowing that someone they didn’t even know loved them that much,” Fonseca said.

“I met Briziada on November 17th,” Fonseca says, pausing and offering a wistful smile, “sorry if I cry.” While the general protocol requires a six-month turn-around time before a sponsor meets the child they have been sponsoring, the World Vision office pulled strings for Fonseca so she was able to see Briziada before she returned to the United States. Fonseca had only been sponsoring her for a month.

Briziada and her family, except her father, spoke no English or Spanish—only Quechua, a regional dialect. “It was the first time I had trouble communicating on SST,” said Fonseca. But communication often comes even when words won’t, and after Briziada, a shy child, warmed up to Fonseca, they spent the day playing with the toy kitchen Fonseca had brought her.  “I pray that by the time I am done sponsoring her that she will be encouraged to pursue further education because of her relationship with me,” said Fonseca.

Working with World Vision left Fonseca with a new view on her two cultures. “I appreciate where I come from. I am humbled about coming from the United States, but also blessed to be a Peruvian.”