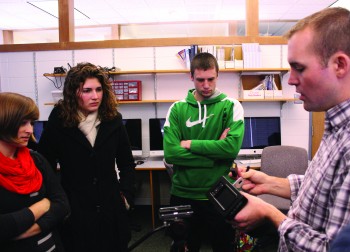 This coming fall, Goshen College will offer a new film production major for students. In the past, a major in communications or theater with a concentration in film were the best and only options for those interested in studying film.

Incoming first years will only have the option of a film studies emphasis with a theater major, as the communications department will no longer offer a major with a concentration in film.  Current students with the old emphasis have the option of staying with what they currently have or switching to the new major.

The new major allows students to “get credit for what they’ve already been taking and show[s] that the courses they’re taking actually are contributing to their actual major,” said Seth Conley, associate professor of communications.

Although there aren’t new courses being offered, the film department has flourished in the past five years. The addition of 5 Core Media as part of the curriculum brought three new production classes, each offered once every three years.

The idea for the major came to Conley and 5 Core Media General Manager, Kyle Hufford, with the realization that the film department was quickly gaining strength. Their initial intent was to create a film studies major, but they found that a stronger emphasis on film production would prove itself more useful.

“We are very heavy on the creation of video in terms of production: shooting, editing and crafting of the story,” said Conley. “We think that makes us unique because not a lot of places, especially in Indiana, have a film production major.”

One of the key differences of this major is the requirement of more film production courses.

“What the film studies concentration had in it was a couple of key courses they could take and we would advise them to take those to be more trained in the field,” said Conley. “There weren’t a lot of film production courses that were specifically required.”

The film production major will also require a theater class because the theater and communications departments “have worked well together in the past,” said Conley. “The connectivity between the departments really helps.” With this collaboration, film production students will gain a better understanding of the different skills required to be successful in the field.

“We believe that students will have more variety, more options with the new major,” said Conley. The students interested in acting in films will be more likely to take on a theater major with an emphasis in film, while those that want to produce will study through the communications department.

The film studies program in Los Angeles through the CCCU will still remain a vital part of the film production major.

When asked how this major will benefit Goshen College as a whole, Conley said that it “gives us the opportunity for more students. It’s a selling point for us to be able to say we do have a film production major.”

For more information on the major, contact Seth Conley at sconley@goshen.edu.