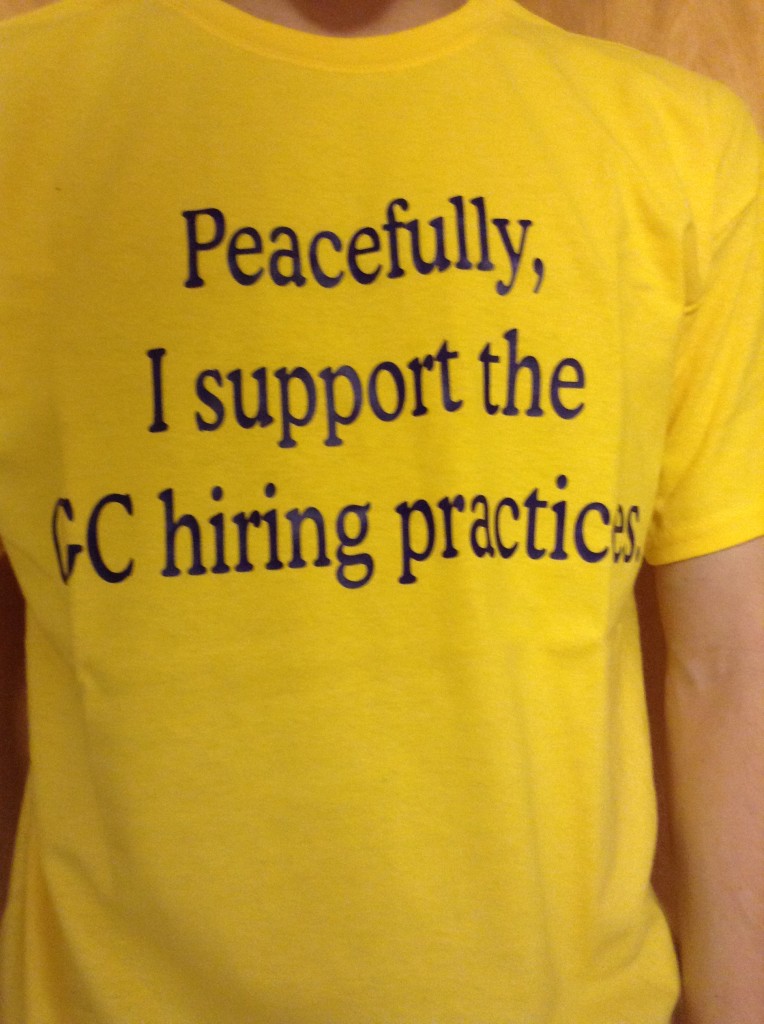 “I know a lot of people who are against the open letter,” said Smith. “It’s an obvious minority. The main goal of this is to get the other voice out, and this is an environment where it will be respected.”

Upon arriving on campus last Fall, Smith was asked if he would like to buy a purple, “Where’s my LGBTQ prof” shirt. When he learned what the shirts were endorsing, he got the idea to buy his 10 yellow t-shirts.

It wasn’t until he saw an article written in The Record expressing a view similar to his own that he decided to place the order.

“We hope to make another order once these shirts are seen in public,” said Smith, who said the shirts will be seen around campus within the next week.

Though he is expecting an evident amount of backlash from the GC community, Smith believes his purchase of the shirts was not an act of hatred.

“We know it’s hard, and it’s really touching the people that are LGBTQ – we’re not hating, we’re not judging,” he said.

Smith feels that the issue of GC’s hiring policy has garnered an overwhelming majority of students favoring a change in the policy. “They’re the majority, and that’s just how it’s going to be,” he said.

However, the voices urging GC to maintain its current policy are present, though not commonly expressed, Smith said.

Smith calls the current hiring policy a “compromise,” since it allows GC to hire whomever it chooses so long as the tenets of Christianity are upheld and non-heterosexual identities are kept private.

Though he acknowledges the thought processes of those that claim such a policy to be oppressive, Smith doesn’t think the ends justify the means.

“The Bible takes a clear stance against it,” Smith said. “Is it worth it to undermine the word of God for a social justice issue in our culture? I think it’s not.”

Smith said specific Bible verses serve as foundations for his beliefs, such as 1 Timothy 1: 8-11, which reads, “We know that the law is good if one uses it properly. We also know that the law is made not for the righteous but for lawbreakers. . .for the sexually immoral, for those practicing homosexuality.”

However, for a verse to represent his reasons for purchasing these shirts, Smith said that he would prefer one that encourages people to carry out God’s work, regardless of others’ opinions.

“The issue at hand is about doing God’s work,” he said.

“We should never be afraid to voice our opinions anywhere,” said Smith, who believes that more students sharing his perspective about the hiring policy will continue to come out of the woodwork.

“I wouldn’t be surprised if there are 50 people wearing these shirts by the end of the year,” he said.