Winter One Acts a Break from the Cold

The Goshen College Theatre Department performed the plays “Stay Tuned” and “Do Not Gentle” for Winter One Acts at the Umble Center last Friday, Saturday and Sunday.

“Stay Tuned” was written by 1999 GC alumnus Peter Eash-Scott. The play explored the impact of the external voices of our daily lives upon our relationships with others.

“It was my first time performing a one act play at Goshen College,” said Hess, “but it was definitely lots of fun and people responded positively to the performance. The author of ‘Stay Tuned’ attended the opening night and didn’t say too much, but later sent an e-mail telling us how wonderful it was.” 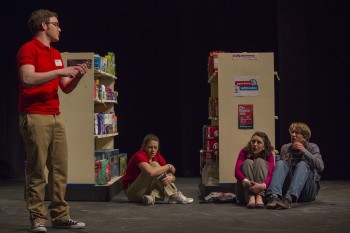 “Do Not Gentle,” originally written by Suzan Zeder, was directed by Angie Troyer, a senior, as her senior performance. Inspired by Dylan Thomas’s poem “Do Not Go Gentle Into That Dark Night,” the play featured Lillian Boedecker who realized, upon death, that she could not move ahead without mending the rifts manifest in her family relationships.

“It was an intimate process,” said Treiber. “With the shorter production time, shortened play, and a small crew, we had to build our relationships with others, as well as our personal selves with our characters. Everyone felt jointed in the end.”