Ten years ago Goshen College had only a chamber choir and a chorale.

Ten years later, Brubaker still directs the Women’s World Choir and Scott Hochstetler has taken direction of the Men’s Chorus.  They will lead the GC choirs and two guest high school choirs in a celebration of GC’s decade of gendered choirs, “Ten Years of Venus and Mars,” this Sunday, Feb. 16, 2014 at 7:30 p.m. in the Music Center’s Sauder Concert Hall. 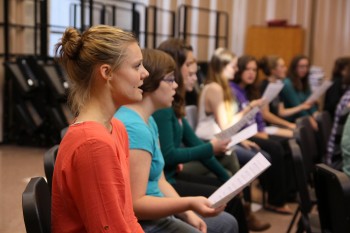 Since early 2004, the men’s and women’s choirs have performed both separately and in combined shows. Men’s Chorus repertoire has emphasized sacred a capella literature, while Women’s World Choir has focused on spiritual music from cultures around the world.

Tickets are $7 for adults, and $5 for seniors and students. They will be available at the door one hour before the concert. GC staff, faculty, and students can get in free.