Track and Field has been one of the most successful sports in the past years at Goshen College, with many athletes having attended the NAIA National Championship in the last years. The team’s coach, Doug Yoder, doesn’t want to change the tradition this season.

“Our goal is always to get as many to nationals as possible,” he says.

This weekend the athletes will start the track season. On Friday, the race walkers and the distance runners will compete in Finley, Ohio while on Saturday, the high and the long jumpers will attend an event at Indiana Wesleyan University.

Coach Yoder talks about this weekend’s opener, saying “It is still early in my mind and we want to make sure we are really ready before we jump right into it.”

All the athletes are working hard. Vinicius Campos, Brazilian first-year runner says, “Practices are hard. I feel like we are giving more than 100% to see the results during the season.”

“So far it seems that everyone is pretty dedicated. We’ve had real good practices,” confirms Coach Yoder.

Many student-athletes joined the team this season. The team is compiled of 33 men and 20 women for the indoor year. New faces are making the team more competitive, with students from all around the United States, as well as Nepal, Brazil, Taiwan and India. Coach Yoder has high expectations for all of them.

“I believe in Mitchell Brickson and Abby Dunn, race-walking All-Americans on the last season. Also the people from 4X8 relay team that was also All-American’s last year,” states Coach Yoder.

However, he has not forgotten about the first-year athletes, saying “that we have some new athletes that are going to make a big impact.” 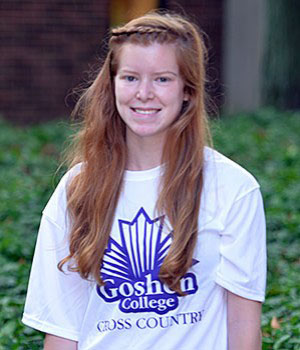 These high expectations are a result of their great achievements before coming to Goshen College. Kayla Gray, a first-year from Lake Region High School, Maine, won the race walking Maine State Championship, taking over for Goshen College sophomore, Abigail Dunn. Gray is enjoying her stay in Goshen and she appreciates the help she has received in her first semester.

“I am really enjoying my classes, friends, teammates and athletics. My race walk teammates are really encouraging and supportive!” says Gray. She also discovered a new process to work in the practices to get used to the new distance.

Gray says, “My Coach has been very supportive and helpful as long distance work-outs are completely foreign for me.”

But now it is time to compete and achieve her goal as soon as possible. “This season I expect to qualify for nationals in one of the firsts meets. And then, I just want to keep working hard to improve my times,” Gray says. 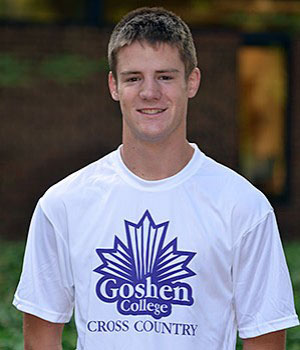 This is the first time he has run indoor track, but he states, that, “By pushing myself hard I will be close to my goals.”

Graber is ready to compete with the track team, where he has many friends because he shared cross-country team with most of the track athletes.

“This helped me to establish a good set of friends to build upon for this semester. To be an athlete was my best choice and I would recommend it to everybody in Goshen College,” he says.

So far, Graber says he is enjoying the practices because “Coach Yoder gives us a set plan for our workouts and he allows us to push ourselves to our fullest. I am learning form him and I am sure that this will be reflect in my results.”

Campos decided to come to Goshen College from Sao Paulo, Brazil, where he achieved some of the top positions in nationals over the past few years. His specialty is the hurdles.

He made the decision to come to United States because “in Brazil it is not possible to do sports and academics, and in Goshen I can receive a scholarship for doing what I like the most: to compete in track.”

Even with only two weeks of experience in Goshen, he is thankful because the team and the coach are helping him and supporting him to do his best.

He says, “They have great skills that help me in my attempt to improve.”

His goals for the season have been set since he arrived in United States.

“I want to qualify for nationals and be recognized by NAIA for my track’s skills,” he says.

There are high expectations for this team that is ready to compete and give their best during the season. Goshen College expects to be represented with some athletes in the highest positions during this season, who promise “we will keep working hard to see the Maple Leafs in the rankings.”