Journey to the College Classroom

Alma Rosa Carrillo Flores woke up every morning to breathe the musty Mexico City air. She sauntered sleepily out of her small, pink toy factory-themed bedroom to meet her brother, mother and grandparents in the kitchen for, possibly, her favorite breakfast of beans with mayonnaise and a souped-up ham sub sandwich called ham cake.

“Ahh, it’s like heaven!” Alma exclaimed, remembering this meal of her childhood. “And café! Not coffee, but café! It’s just a little plastic cup with Nescafé and Alpura Mexican milk. It’s delicious!” 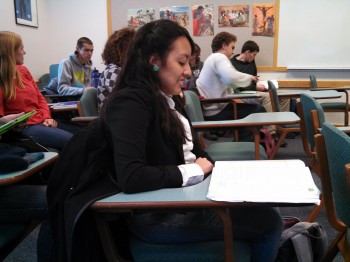 Alma in a recent French class in preparation for SST in Senegal.
Photo by Isaac Fast

Their house was three stories high, a narrow rectangle of cement and red brick that Grandpa Antonio Carrillo had laid by hand nearly 40 years earlier. On their roof still reside Goofy, Booger and Lucky (otherwise known as “Fat Sausage”), the family’s beloved puppies. Alma’s eyes lit up at the mention of her Goofy, who apparently sheds actual tears every time Alma leaves Mexico.

After a quick Google search for the English translation of her dog, we identified Goofy as a fluffy Cocker Spaniel.

“Oh I miss him…almost as much as I miss my mom!” she said jokingly. She didn’t stay with her family in that brick house forever.

Until Alma was 3, her dad, Martín Carrillo, worked here and there with Grandpa Antonio as a freelance carpenter, but he never could make enough for them to move out and buy their own house. One day he decided it was time: he would immigrate to the United States and send back money to better their family’s life. His aunt was already settled in Indiana, and though he didn’t know her well, she agreed to receive him if he made it to the U.S.

When Martín left Mexico City for the U.S. border, he had only about $50 and a backpack containing T-shirts, faded jeans and two bananas, as well as a Mexican passport, but no U.S. visa and no U.S. document of any kind. He paid a coyote to get him just across the border to Mexico, and he made the rest of the trek through the desert on foot into the nearest town.

He took buses and flew by plane, and eventually, he reached his aunt’s house in Indiana. But he found that she had no intention of boarding him for long. After a few months, he moved out and began his career of working in multiple factories, physical labor for pay. He made minimum wage, only $3.15 in Indiana at that time, and that provided enough to sustain himself and to send money back home. But even with those remittances, Alma and her family never saved enough to move out of Martín’s parents’ house.

As Alma grew up without a father, she wasn’t sure if it was worth it—would anything even change? In first grade, Alma remembers missing her dad while other kids brought theirs to school for Father’s Day. She had no one to bring. She would grow to forget about her absent father until he was not a part of her life at all. She grew close to her Grandma Rosa instead, loving her like a second mother and learning all her wisdom. But when she was 13, her father would make a reappearance.

Martín had obtained legal residency in the U.S. at last, and Alma’s parents began talking about opportunities for her to get a better education in Indiana. Her mother, Angeles, was not ready to leave Mexico, but they decided it was time for Alma to travel across the border to live with her father and to enroll in middle school there.

The Monday five years ago when Alma walked into the Benito Juarez International Airport, her grandmother, grandfather and her mother all accompanied her. She held Grandma Rosa’s hand and would not let go. Their home was all she’d ever known. She hadn’t seen her father since she was 3 years old. The only close family she had was with her right there in the airport, and she was about to leave all of them.

She brought with her a single suitcase, filled with framed pictures of the family she was leaving behind; her favorite Mexican candies, sweet Bombones and spicy Paletas de Pollito; and her collection of MyScene Barbies. “I still have all 30 Barbies!” said Alma. “They still sit in their black Barbie playset.”

As she stood in the security line, she looked back at her family and knew she might not see them again for years. Behind her in line was an 8-year-old girl who was crying, also leaving her family behind in Mexico to travel with her father to the U.S.

Alma was on the brink of tears herself, but she composed herself for the little girl in that moment. Alma crouched down to the girl’s eye level and told her how much fun the trip would be and about all the exciting things they would see in the U.S. By comforting this girl, Alma calmed herself as well. Then she was off to meet her father for the first time in 10 years.

Martín picked her up from Chicago’s O’Hare Airport and took her to his small home in Elkhart. As Alma made the walk to her new room, she encountered four of her uncles also living in this house, but none of them said more than hello to her, and they would never say much more than that. She enrolled in West Side Middle School and attended her first day of class in August of 2008.

Alma knew none of the strange language spoken in this new world, so she was put in an ESL class with many other Hispanic children—some older, some younger. Though her ESL teacher was dedicated and friendly, Alma couldn’t adjust to this new culture, living in a house where no one talked to her and going to school where she made only a single friend—a Puerto Rican girl named Gloria—who one day traded her friendship for acceptance among the other Hispanic kids, ridiculing Alma’s strong accent and chubby teenage body. Her father went to work at the factory; her only friend tormented her; her family was hundreds of miles away. She was completely alone.

“I felt like everyone hated me,” said Alma, eyes downcast. “Only my dad actually tried with me, and the problem was, I was still very rebellious against him, so I didn’t even have him…I didn’t know him.”

Despite every obstacle in her way, Alma was determined to succeed. She worked harder in school and had a great ESL teacher, Ms. Cruz. “She helped me through all of the hard moments of my life,” said Alma. “She taught me English. She taught me how to…succeed.”

Her freshman year in Elkhart Memorial High School, she joined the track and field team. “Coach Homo loved me, and she always encouraged me for losing weight and getting better,” said Alma of her other life mentor while in school. By the time she was a senior, she had been getting straight A’s for years, made plenty of friends, and had begun a relationship with her dad.

“I think I started to mature more,” admitted Alma. “I stopped rebelling against everything he would tell me and accepted him as my dad.”

Still, she didn’t know where her life would go from there. She’d succeeded in a quality American education against every possible opposition, but what now? She wanted to get away from this place where she’d only just this year started to feel welcome. She wanted to travel away to college. She had no money, and her father insisted on continuing his job as a factory worker—despite her arguments that he was qualified for a higher position.

Then she got a call from an admissions counselor named Sabino Rivera. He told her about Goshen College, just a half-hour away (a little too close for her, really) and encouraged her to apply, saying that she could attend if she really tried.

At first, she wasn’t even sure she would get accepted—her SAT scores weren’t as strong as her overall school grades because of the heavy amount of reading required. But she was accepted, and she also received another surprise: the possibility of the Center for Intercultural Teaching and Learning Scholarship, a scholarship just for incoming Latino students who show “leadership potential and commitment to giving back to their community.”

She applied. She told her story, and she got the scholarship, and around that same time, she found she could apply for the 21st Century Scholarship and the Stoltzfus Diverse Leader Scholarship as well. She got both.

She spent her summer in the SALT program, a mandatory summer service program for other scholarship winners like herself. “There were a few times when I got tired with the experience,” explained Alma, but overall she really enjoyed the summer of service. By the end of the summer she had done it. She finished the requirements and was ready to start her first day of college.

Now every Monday, Wednesday and Friday at 11 a.m., Alma sits in the Goshen College Ad building for Academic Voice, moves on to Quantitative Reasoning and ends her day with French class. She is excited to journey to Senegal for SST in her junior year. Alma continues to live with her father in Elkhart and commutes to college in her dad’s blue Dodge Durango.

“But I actually live in the library,” said Alma, who sat in the Good Library computer lab for an interview. “I stay here almost all day to do homework and be with my friends.”

She packed up her things to drive home for the night at 11:30 p.m., with a still-unfinished Academic Voice persuasive essay. I asked her how she felt about her workload and being in college.

“Only two more hours of work to go,” she said, smiling as if to mask the sarcasm. “It’s tough…but I certainly enjoy Goshen!”