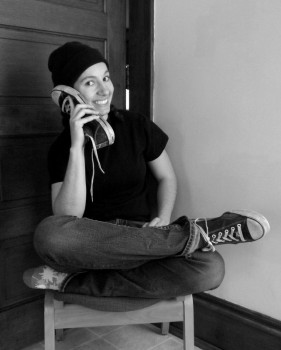 Funnies Editor Maria Jantz broke into Howell house to steal Reuben’s shoes, much like she stole his spot on the Funnies page.
Photo by Kate Yoder

We in the funnies have a saying; it deals with the passing of the torch, the graceful transition of one generation to the next, and the slow, subtle ways in which the world changes. It usually goes along the lines of:  “Wait…what just happened?!”

This article will attempt to bring you, our loy—excuse me, their loyal audience through these difficult transitory times. I will be quite blunt.  I am no longer a Funnies Editor of this formerly distinguished page. As Gandalf once told me, “I will not say, do not weep, for not all tears are in evil.”

*Respectful and solemn silence, about 40 minutes.*

I began writing as child—I was quite young at the time. From early on, it was evident I was destined for greatness. Critics in my fourth grade, circa 2003, lauded my short story “There’s a Gecko in my Pocket.” (Notably, this was the year I co-authored a monumental PowerPoint on fungi; I would never look at bread mold the same way again.) The very next year I suggested a name for the fifth grade newspaper, which was selected in a blind (but no doubt unanimous) vote, establishing our new paper as the Wardcliff Squid.

While never actually published, the Wardcliff Squid inspired me two years later to begin a publication of my own, simply entitled the Squid. This remarkable opus would, over the next number of years, bring the most up-to-date and fascinating material to my many devoted subscribers. Among the topics discussed: kelp, the Sasquatch, nebulas, which kind of dolphin is the best (Pacific White-sided), various sandwiches, the swamp near my house, the word ‘thorax,’ the incredible diversity of frills, top ten worst titles (‘Being Underground’), and so much more.

While the Squid has not seen a recent edition, it is still far from dead and several articles are allegedly at various stages of completion. No doubt I’ll now have more time to devote to the furthering of this superior publication…

Now in my third year at Goshen College, I have written articles that have become legend. The ‘intolerable obfuscation’ of the eye-level dining hall window frame.  Live performance elevator music. Apartment SST. Indeed, my final article of last semester has remained unchallenged in the newspaper stands for over a month.

What will I be doing now that my irreplaceable wit is no longer working within the constraints of a Record page editor? This is a question I have heard from many an expectant fan. The truth is, I don’t know yet. I’ve toyed with the idea of ‘first human on Mars.’ I probably would have done this years ago, but I haven’t been able to think up a catchy ‘one giant leap’ sort of a line—I’ll probably have time now to work that out. I’ve always been interested in epic poetry—perhaps I could do Beowulf, but the right way this time. I may choose to hone my already celebrated trombone-playing skills.

My deep affinity for molluscs aside, the world is indeed my oyster. This is the lesson you must all take from stories of promising careers cut short, of hope in the eye of a hurricane, of tragedy unparalleled: the universe may be the worse for it, but you can at least pretend it’s not.

Also Maria Jantz is supposed to be an adequate writer.