Every Tuesday, Wednesday, and Thursday, male volunteers from GC’s campus Social Reform Club (SRC) visit the Elkhart County Jail to help incarcerated male minors work toward their GED. They tutor, laugh, and simply enjoy each other’s company. Every other Saturday, the women of the SRC visit the smaller female section of the jail to push around carts of books from the jail library, make small talk with the women there, and brighten up their days.

“It’s a very humanizing experience,” said Andrea Moya, a leader of the SRC. 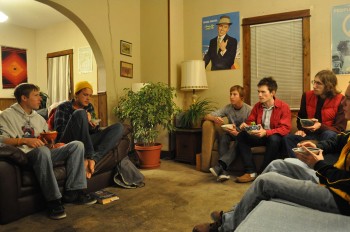 In the summer of 2012, the SRC took root; they wanted to promote social justice, even if they weren’t yet sure how. Their first year, the club brought in guest speakers; participated in the School of the Americas protest in Georgia; and organized the United Club Week, where multiple clubs came together to talk about LGBTQ and immigration topics. This school year, though, the SRC decided to start a more lasting program.

“We wanted to do something more stable this year,” said Moya.

Martin Hofkamp quickly took leadership of the project, contacting Corey Martin, the jail chaplain, and organizing visit times. The program started quickly. “We weren’t sure what we were doing at first,” said Ammon Allen-Doucot, fellow member of the SRC. “We had a training session to be able to visit, and in that session, they pretty much tell you everything you can’t do.”

The volunteers are only allowed three items when entering the jail to visit: a Bible, a single sheet of blank paper, and a bendy-pen.

The male program has about 10 volunteers, so they go in groups of three to visit the jail rotating to a different group each visit day. One goal is to tutor the inmates and help them get their GED, either while still in jail or once they get out. Many of the people who get out of jail end up back inside after a few years. “It’s hard to break out of that cycle,” said Allen-Doucot. “It starts to define you.” The volunteers try to do something to disturb that cycle, whether it be teaching the inmates or just being a friend.

A possibly larger goal of their visits is to show the men in the jail that somebody cares. “It disgusts me how the prison system separates people from society,” said Hofkamp. “We punish just the individual for crimes he committed as part of the system.” Many of the men in jail have lost hope and are excited for any change of pace in the everyday jail schedule. “We try to convey some information and take their minds off what they’re going through,” said Hofkamp.

Likewise for the women volunteers, who visit all the female inmates while giving them books to read, the main goal is to give them something to look forward to and to treat them like people. “I’ve noticed since we’ve been coming…they are more hopeful,” said Moya.

But a change that each of the volunteers said was profound was the change in themselves.

“Now when I picture a jail, I see faces; I see the people inside instead of just the walls of the building,” said Moya. Allen-Doucot said his main goal is to “make a lasting relationship that creates human identity.”

Seeing the people inside the jail helps them stop the demonization of inmates and start seeing them as people equal to themselves. “It gives us the opportunity to expand our own consciousness,” said Hofkamp. “It’s important to show people that there are people right here in Elkhart County who are suffering because of our strict sentences.”

As the program expands, the need for volunteers is also expanding.

“We need more guys and more cars,” said Moya, who wants to use the SRC to help distribute books to the male side of the jail as well. “We do what we can,” said Allen-Doucot, “as just a couple of college guys.”