This Friday, the folk music and a cappella ensemble, moira smiley and VOCO, will perform in Sauder Concert Hall. 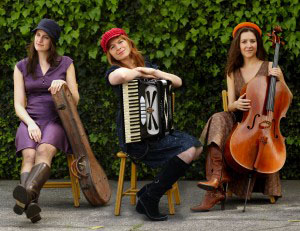 According to the band’s website, moira smiley and VOCO was named the number one a cappella group in 2007 and have since been called, “persuasive, near perfect musicians,” by the Herald Times. Their original pieces have been adapted for larger choral groups and have been performed on multiple occasions by Goshen’s own International Women’s Choir.

The voices of the trio of women make one cohesive sound. However, each individual uses their voice and body as distinct “instruments.” One is a body percussionist. Another a vocalist. The other, an instrumentalist.

Together, the band’s genre is classified as both folk music and a cappella. The “rompin’ stompin’” body percussion is accompanied by cello, banjo, ukulele and accordion.

Their music evokes the sound of both energetic and informal street singing and the sophisticated classical orchestra. One of their biggest inspirations has been the work of the late Béla Bartók, a prominent folk music composer of the 20th century.

The concert begins at 7:30 p.m. with tickets available at the door one hour prior to the start of the concert. Ticket costs are seven dollars for adults, five for seniors and students and free with a valid ID for Goshen College students, staff and faculty.