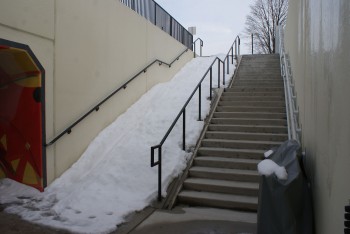 With a storm adding 9.3 inches of snow, extreme sub-zero temperatures, as well as a “state of emergency” declared in Elkhart County, the spring semester at Goshen College began with an interesting twist.

On January 5 an email from Bill Born, vice president of student life, informed students of a “state of emergency,” preventing people from driving on the roads. Born recommended that students “plan to arrive sometime during the day on Tuesday.”  With campus closed on Monday and a strong recommendation to stay off of the roads, GC students needed to plan their return to campus around the weather.

Ammon Allen-Doucot, a sophomore from Hartford, Conn., encountered some travel delays taking the train back to Goshen.

“With the snow on the (railroad) lines, there wouldn’t be any trains or buses going to South Bend,” Kaasa said.

Abigail Dunn, an R.A. who was travelling from Maine, was stranded in Baltimore for eight hours waiting for a flight to Chicago. “Because of the temperatures, the airport was having trouble re-fueling the planes,” Dunn said. “The fuel was freezing, so they had less fuel to go around.”

Like Dunn, many other students encountered their own travel delays, whether it was simply the State of Emergency keeping them from campus or cancelled buses, trains, and flights.

When asked about her overall travel experience, Dunn said, “After 21 hours of travelling over a period of two days, I’m just happy to be back on campus, and I’m ready to start the semester.”