Media Bias and the Government Shutdown 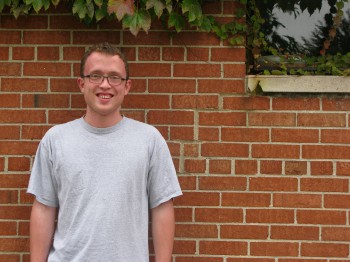 T.J. Keiderling on the government shutdown. Photo by Kate Stoltzfus

I follow the news, sometimes. Almost everyone does. So when I heard about the government shutdown I tried to follow it a little, and understand what was going on. You hear about things like that and you wonder sometimes what really happens.
But I had a pretty hard time actually getting a picture of what was really happening. I’d look at the New York Times and find an article screaming at House Republicans for voting a certain way, and then I’d watch a televised John Boehner speech on CNN, only to hear him curse at everyone who wasn’t on his side. Everywhere I saw, read or heard news that was Democrat or Republican.
This got me thinking a bit. See, the main criticism people had towards our government in the shutdown was that party politics was taking over from the business of governing. It’s time to call our leaders to the carpet, people said, because they aren’t doing their job anymore. They’re letting petty, in-house rivalries take the place of care for US citizens. And so on.
News media isn’t far behind, as far as that criticism goes. It is profoundly disturbing, but it seems as though every major news source has some kind of political affiliation. Ask enough people, and the picture becomes clear: “Oh yeah, the New York Times is really liberal. The Wall Street Journal is conservative. CNN is Republican.” And so forth.
Situations of this sort annoy me. I can’t stand to see politics take over from real life. People deserve to get a good picture of what goes on in the world around them, not one through a distorted lens.
But what is my place? What can I do about it? News corporations control huge portions of the stock market. Media moguls like Rupert Murdoch’s family have half the world under their thumb through their media outlets. The sheer size of the news industry staggers me. I don’t know what to do. But the fact remains: I want to be informed. I will keep trying. But I can’t stand running into situations like this, where the people paid to give us the story can’t even tell it because of their bickering.
Thousands across the country were unemployed or on furlough because of the only recently resolved government shutdown.  If only the United States government could function in such a way as to solve some of the problems in our economy and our society that lead to a crisis of this magnitude. As well, it would be wonderful if the mainline news media could resort to what has become a rarity in mainline news: objective coverage.
Of course, arguable news media would not offer the balanced, vibrant experience of exposure to opinion it does unless there was some bias involved. But in the light of the government shutdown—when the country teeters on the brink of disaster, ready to plunge into default—the last thing American citizens need is for major newspapers to be lining up behind the two parties and their fights that are bringing us to ruin.
I sincerely hope media bias fades far into the background as we press on to confront greater issues like our debt and the possibilities for positive change across our country. And I hope that one day college students like me can find a way to be informed without hearing bias. Maybe the way is out there. Am I just not looking hard enough?