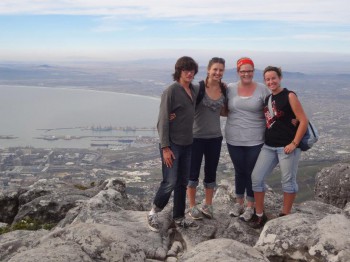 This past April, Anya Kreider found herself packed in with two weeks of luggage and her friend, Abby Cable, in the trunk of an Opel Meriva traveling at 70 miles per hour down a highway in South Africa.  The Opel Meriva, a hatchback built to hold five people, carried seven: Kreider, Cable and five others, who were wedged together for 18 hours as they traveled across South Africa, from Pietermaritzburg to Cape Town.

Welcome to Radical Journey!  Through Radical Journey, a Mennonite Missions Network program, Kreider and three others participated in a ten-month service term.

After graduating from Lancaster Mennonite High School in 2012, Kreider spent her gap year in South Africa.  Kreider said she was influenced by watching Karina, her older sister, have a wonderful experience in Switzerland studying abroad; she also welcomed a year in which to consider the burdensome question of what to study and at what university, for which she did not have confident answers at the time.

For the majority of the ten-month term, Kreider resided with a host family in Pietermaritzburg. In downtown Pietermaritzburg, Kreider worked for the Church Land Programme, a local organization that dealt with land rights and food sovereignty in remote regions.  The Church Land Programme focused on aiding grassroots organizations as well as influencing policies and politics.

Working downtown was strange for Kreider because she was one of few white people. Nearly all whites remained in suburbia, making her clearly identifiable among the many people of color.  To get to her job, Kreider walked and rode public transportation.  Riding buses was “scary in a sense,” said Kreider.  “No young minority females used public transportation.”

Near the beginning of the year, as Kreider was sitting on an idle bus going to work, a man walked past her and gave her an odd look.   “Later, he came back and sat in front of me,” Kreider said.  “Then, he got off the bus and stepped back on shortly after getting off, only this time he sat next to me.”

“You’re white,” he said. “You’re the first white person I’ve seen in months!” he exclaimed as he began to tug at the tan, yet white skin on Kreider’s hand out of curiosity.

Although apartheid ended in 1994, much segregation remains in South Africa.  Through her work with the Church Land Programme, Kreider witnessed the racism, crime and inequality that remains.

Although the people remain informally segregated, “it is promising, considering it has only been twenty years, but there is still room for improvement.”  Kreider noted that even in the United States, racism and segregation exist after almost 150 years since the end of the Civil War.

Alongside racism, crime is also prevalent. “Most people know a family member or a friend who has been raped, which greatly affects women in South African culture,” Kreider said.  She also found it particularly hard to “come to terms with the poverty and inequality.”  Despite the hardships of life in Pietermaritzburg, “people remain hopeful and proactive.”

For Kreider, the group vacation to Cape Town was among the highlights of her gap year.  This two-week trip in late April gave Kreider an enjoyable hiatus in the midst of a challenging year.  “Cape Town was amazing,” said Kreider.  In keeping with the spirit of Radical Journey, they bypassed hotels in favor of staying in a hostel. During the visit, Kreider took full advantage of the perks Cape Town had to offer: taking surfing lessons, tasting Stellenbosch wine and hiking Table Mountain, one of the seven natural wonders of the world.  Best of all were the “great little cafes,” Kreider said with a smile.

Although, South Africa proved to be challenging at times, Kreider had an overall positive experience.  Kreider said it was not easy feeling awkward, scared and out of place in a new culture, but she noted it was harder to leave her friends and coworkers at the end.  Although it was tough, the trip was “totally worth it.”  Kreider said, “I think I have learned more this year than almost my entire formal education combined. They don’t teach you in school how to cram seven people with two weeks’ worth of luggage into a small car.”