Basketball teams to kick off season with Hoopfest 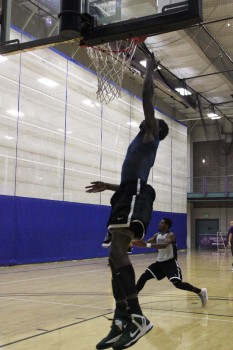 It’s getting colder, most of the leaves have fallen, the soccer nets are being taken down, which means one thing – it’s time for basketball season.

The Goshen College men’s team will jumpstart their season this weekend in the annual Maple City Hoopfest, a four-team tournament at the Rec Fitness Center featuring Lourdes, Madonna, and Bethel Universities. The team will face Lourdes University in the opener at 8 p.m. Friday and Madonna University at 3 p.m. on Saturday.

The women’s team, who began their season Tuesday with a 41-71 loss against Indiana University Northwest, will look to rebound on their own turf with their first home game Saturday against Aquinas University.

This season offers a fresh start; freshman are a vibrant part of each roster, with seven on the women’s team and four on the men’s team. Neal Young, head coach of the men’s team, is beginning his first season with the Leafs. The women will play under head coach Stephanie Miller, now in her third season.

Said Lynnia Noel, a freshman, “I’m just excited to get going. The team has been practicing hard and now it’s time to show what we’re made of.”