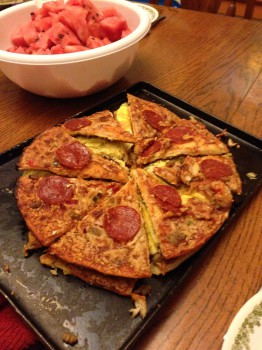 House meals. You may have heard about them, eaten them, or even made them. Here at Sketch House, a beloved off-campus abode, we have created an ambitious six-night-a-week meal plan. It’s like the 80 block meal plan, only slightly more affordable and with a severe lack of French fries. With this kind of regularity, I know that every Friday evening I can anticipate a new look at the culinary arts provided by Henry Brenneman Radcliffe Stewart.

Henry’s recent meal ingredients included oil, eight pre-birds, and two freezer pizzas left over from a previous engagement (party – congrats, Emma and Phil).  Watermelon was provided by a housemate concerned with the well-being of others … that housemate was me.  As Henry’s diet consists mostly of eggs, it’s no surprise that they were a vital layer of his concoction.  The eggs were fried in the “dirty pan,” a well-seasoned skillet, always slightly oiled except after the occasional wash or grease fire.

After the separate ingredients were prepared, they were carefully placed one atop the other to form a dish worthy of NPR’s Sandwich Monday Blog.  Our comments were as follows:

Jess Sprunger: “I would probably eat this again.”

Henry: “They finished it!”

Between the five of us, we did in fact eat the whole thing. I even had a second serving. If you are curious about the nutritional facts for this meal, remember that ignorance is bliss.

The verdict: If there’s one thing to take away from this experience, it’s what Mary Kate and Ashley Olsen taught us years ago: “Put it on the pizza!”