By Kate Friesen and Kate Stoltzfus 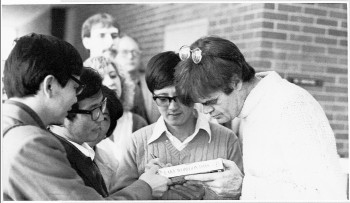 Keillor with students at Goshen College during a visit in 1985. Photo provided by Comm Mar.

A full audience spent an evening with Garrison Keillor, famed writer, storyteller and radio personality, Tuesday evening in Sauder Concert Hall. Keillor appeared in a suit and his signature red socks and sneakers, and began the night with personal stories as well as tales from his fictional town of Lake Wobegon.

Halfway through the show, Keillor led audience members in singing a series of gospel and folk songs, such as “America the Beautiful” and the Doxology. He resumed with more tales, and ended with some of his own proverbs. What stood out?

When asked what his favorite part of storytelling is, Keillor responded, “When something surprising pops up, which happens. Sometimes astonishing things unfold in the process of it. Even if it’s a story you’ve told over and over, you always find out new things.”

“Be good to your friends now, because there will come a time when there is no reason to like you except out of longstanding habit.”

When his uncle dropped dead in the street: “The ambulance came, and the police with their red and blue sirens, and the fire department and lots of yellow tape. He always loved this kind of scene, it was a shame he had to miss it. And by only ten minutes.”

“The man had a great wooly beard. It looked like he was eating a sweater.”

“When you are an English major, you don’t casually burn your bridges.”

“Gratitude is the cure for this country. We’re short on it.”

“A man walks into a bar with a handful of dog turds and says to the bartender, ‘look what I almost stepped in!’”

“Cheerfulness is a choice. You put it on in the morning, same as you choose your underwear.”