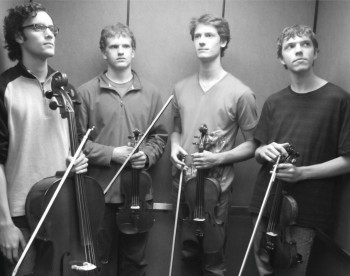 According to several reliable sources of mine, a bizarre phenomenon referred to by some as “music” is making a comeback. I myself can attest to this, having recently attended several concerts at which music was a notable feature. Perhaps some of you are aware of the Goshen College “Fall Kickoff” or the “Homecoming Gala.” To many, these were no doubt obscure venues known more through rumour and superstition than anything else. However, having gone to them myself, I must say that I was pleasantly surprised by what I found. Music, I had to conclude, is indeed making a comeback.

I decided to test the waters and see how far music had already spread around campus. At an orchestra rehearsal, I took it upon myself to make some inquiries. I asked a fellow musician and music major: “Have you heard of music?” A baffled pause was followed by a hesitant “…yes?”

While not a particularly encouraging response, I think it safe to assume music to be endemic to at least certain parts of the college. However, my exhaustive and exhausting research turned up a disturbing piece news.

Even here on a campus seemingly steeped in musicality, there is the conspicuous and inescapable absence of that finest of musical forms – elevator music.

There are elevators all around campus. In the Administration and Science Buildings. In Wyse Hall, the Connector, and the apartments. And in the Music Center itself.  In none of these do I hear the dulcet tones of soft jazz, the mellifluous strains of quite chamber music, or even see a page of a hymnal pasted on the wall for perusal.

I believe this to be a supreme affront to my now musically attuned ear. Not to mention a terrible inconvenience. In my past years, I spent a great deal of time riding up and down the Connector elevator in the presence of both others and a stiflingly awkward atmosphere. Circumstances such as these are characterized by the archetypal symptoms of unease: the shuffling of feet, the clearing of a throat, the close examination of likely the least interesting elevator door on campus, the classic “I-will-now-pull-out-my-phone-to-appear-socially-occupied.”

(It seems the college has in fact noticed this plight.  I, for one, am not pleased with the solution, however. For about a week now, at 15-minute intervals it seems, a selection of music is broadcast on loudspeakers from the Union. While I’m no music critic, I must say that I’ve heard better music from a tone-deaf fish – the composition repeats every 12 hours without even the slightest variation!)

My proposal is quite simple: live performers in every elevator. This would not be difficult in the slightest. A number of instruments are particularly conducive to these venues. Pianos are a staple of much modern Western music and would function admirably in elevators. Small low brass sections would perform wonders. Timpani, of course. Quartets and ensembles are good fun. A hurdy-gurdy, more for its name than anything else. Mariachi bands. The didgeridoo is a noble instrument.

At the very least, wandering minstrels must be hired.

The awkward silence of the elevators is one great downfall of Goshen College, but it is not without remedy. Soon, student admission will no doubt rise and more people than ever will be taking the stairs.