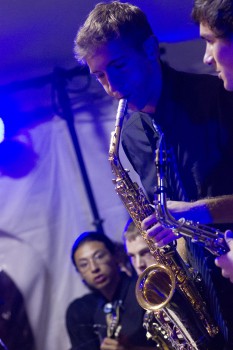 From Sauder Concert Hall to the streets of downtown Goshen, Lavender Jazz—Goshen College’s jazz ensemble—plays an assortment of styles including salsa, funk, Latin, rhythm and blues, as well as standard jazz repertoire. You may have seen them recently during October’s First Friday event.

John Miller, senior said,“It’s the longest and most public performance we do, and it’s only a month into school.”

Miller has been in Lavender jazz all four years, and plays the upright as well as the electric bass.

“My high school had a fantastic jazz program, and through playing in it, I gained an appreciation for the genre. I love being able to just keep playing music. When Brendyn (the band’s drummer) and I are really grovvin’, there’s a particular feeling to it that’s pretty fun,” said Miller.

There are 20 students in the ensemble. Members audition in the beginning of the year, and rehearse for three hours a week.

Christopher Fashun, Goshen College assistant professor of music, is in his fourth year of conducting the band.

“We have a repertoire of about 20 pieces, and will probably add about 10 more by the end of the year,” said Fashun. “This is the strongest, most musically diverse, versatile and talented jazz ensemble I have had since coming to Goshen College.”

Fashun has many plans for this year’s group.

“We are planning to record an album this fall with a combination of tunes that include various styles of swing, Latin, and funk. We are also hoping to present a jazz recital with a couple of small jazz combos as well,” said Fashun. “Next semester, I have begun to make plans with our Swing Dance club to organize a ‘Sing and Swing’ event for all GC students.”

“I’m looking forward to the small group and combo stuff,” said Miller. “It’s always been my favorite part of jazz. We did a little bit of that last year, and I was reminded of how much I enjoy it. Also, I’m just looking forward to being able to perform for people.”