During the Homecoming events last weekend, eight people met in the Koinonia room of College Mennonite Church, taking part in a rare opportunity to share their 65th class reunion to reminisce and reflect on how Goshen College has evolved since they turned their tassels in 1948.

“It’s changed a lot since 1948, I’ll tell you that,” said Roger Neumann, a chemistry major from Illinois.  He went on to explain that while the buildings have grown, the philosophy of both the administration and students is dramatically different.

John J. Fisher, an English major from Pennsylvania and Professor Emeritus of English at Goshen College between 1953 and 1992, notices more “vocational confusion” among young college students today, and mentioned that there are many more choices of study compared to what was available 65 years ago. 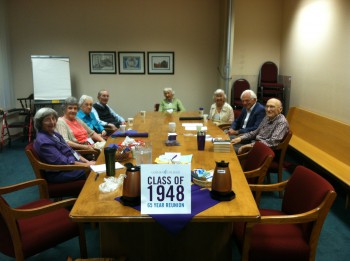 The class of 1948 celebrate their 60th year reunion. Photo by Logan Miller.

urgent in our time,” said Fisher.  “So many high school graduates aren’t sure what they want to do.”

However, post high-school decisions were already made for most young men during the era that these eight alumni were raised.   “A significant difference between our generation is that there was a draft, and we were at war,” said Fisher.

Dorothy Mann-Horst, an elementary education major from Elkhart, said that during her freshman year in 1943, there were only 39 men attending college that year.  Conscientious objectors were sent to service camps while soldiers were sent to Europe—but young men studying to be pastors and ministers remained in school.

In spite of graduating during the wake of World War II, the class of ’48 has fond memories of college.

Competitions between the Adelphian and Vesperian societies on campus kept most of the young men entertained, including a game that Fisher referred to as, “Manhunt,” in which one person from each society was taken out to the woods or the quarry south of town, and the rest of the society members would search for the opposing group’s man and force him back to campus.

“Earl Lehman,” explained Fisher, referring to one round of the game. “He was an Adelphian, and we got him once, and he was a tub.  We couldn’t handle him–we were just little pygmies!  So we finally found a ladder and roped him to it to bring him home.”

The Adelphian fountain in front of the Administration building also has a history of people-snatching.

According to Fisher, the fountain has traditionally been a source of both celebration and discipline.  Newly-engaged men would get abducted by their peers at night and thrown into the fountain while students would watch from the Kulp balcony.  And occasionally the more ornery students would also be snatched by peers and dunked in the fountain.

Despite fountain-based shenanigans, life was very structured and strict compared to student life on campus today.  Pauline Clemens-Fisher, a double major in French and English from Pennsylvania, explained, “We had to be in at 10:15 p.m. every night.  The guys could be out till way late, but if the girls were in bed then the guys of course were safe.”

Nevertheless, a curfew wouldn’t always hold the young women back.  “Oh, I went up the fire escape a few times,” Pauline said with a mischievous grin.

But they certainly valued their Goshen College experience—especially for what they took away from it.  When asked what was most valuable in their experiences, Fisher simply pointed to his wife, Pauline, and smiled.

“People are the most important thing,” said Bob Ebersole, a pre-med graduate from Ohio.  Mary Herr-Weaver, an elementary education major from Pennsylvania, agreed with Ebersole, stating, “I think you have more lasting relationships.”

“One of the things it did for me was it solidified my faith,” said Ruth Lederach-Rittgers, a biology major from Pennsylvania.  She appreciated being around other young people from the same faith and sharing that experience with them.

The alumni finished out the rest of the weekend reconnecting and catching up with friends and family from the area, but they don’t expect any more class reunions to be arranged for their age group.  “I think they figure there’s no point in having a 70th,” said Pauline.

The friendships, the memories, and the experiences left lasting impressions on each of them—even 65 years after parting ways. Even though mentalities, buildings, and philosophies have changed, Goshen College will always harbor fond memories for members of the Class of ’48.