Alumni recognized for lives of service 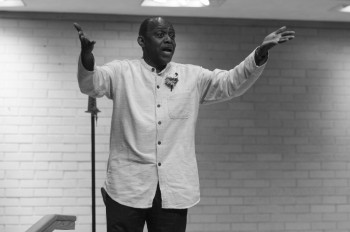 At the close of his speech, Tony Brown, a 1971 Goshen College graduate, led the diverse attendants of Friday’s homecoming convocation in song. It was not the venerable 606 or some other equally challenging hymn, but the simple Sunday school tune “He’s Got the Whole World in His Hands.”

Though lacking the four-part harmony so characteristic of Goshen College and the larger Mennonite community, the song—with generations of Goshen College students singing together—testified to a rich heritage, recognizing a shared history of place and community.

Peter Eash-Scott, director of the alumni board, introduced the awards and the award recipients by describing what they represent.

“These awards honor and recognize achievement of people who are living out the Core Values,” said Eash-Scott. “What you learn here, become here, the seeds of ideas that start here, will live and grow long after you leave this place.”

Eash-Scott then recognized the two recipients of the Culture for Service Awards: Tony Brown and Arden Shank.

Brown, a member of the sociology faculty at Hesston College and an acclaimed vocalist, has used his music to touch the lives of people around the world and bring healing and peace to troubled places.

Shank worked for a number of years at LaCasa, Inc. in Goshen along with other outreach/ministry programs that helped meet the needs of low-income residents in the Goshen/Elkhart area. He is currently the president of Neighborhood Housing Services of South Florida (NHSSF), an organization that seeks to provide housing for the socioeconomic lower-class.

The convocation also recognized Lynda Hollinger-Janzen, graduate of 1978, with the Dr. Ruth Gunden Champion of Character Award. She was honored for her work as a teacher in what is now the Democratic Republic of Congo and for her work in health-education in Benin. The late Fred Litwiller, class of 1962, received the Dr. Roman Gingerich Champion of Character Award and was represented by his wife. James Brenneman, president, said Litwiller is missed by the Goshen and Hesston communities alike and will be remembered for his teaching and coaching at both colleges and his commitment to service in every capacity.

Following the awards, Brown addressed the crowd, reinforcing the importance of a life of activism and service.

“We can’t stop working for justice, peace and freedom,” Brown said. “Despite how far we’ve come, we still have much work to do. May Goshen College continue to promote healing in the world, peace by peace.”

Brown’s life is a testament to his words. But what does a “life of service” mean to him?

“A life of service is related to a life of giving of yourself to others,” said Brown. “Be with people, bring some joy, encourage them, show some compassion. It’s about valuing others and paying attention to their struggles and their plight and being present with them.”

Brown’s speech culminated in song—“He’s Got the Whole World in His Hands”—and the convocation concluded with the signing of Goshen’s unique alma mater, both tributes to Goshen’s valued culture of music.

“Music is something that makes a connection with people,” said Brown. “It transcends language, it transcends culture. It’s universal.”