A Modern Clash of Civilizations

And I’m Mohammad. I’m from Tehran—the capital of Iran.

Martin: Before I met Mohammad, I knew everything about him. He came from a sexist culture, lived under a volatile, repressive regime and spoke fluent Arabic.

Mohammad: Before I met Martin, I researched his country. I then knew that his country had a history of violence and treated women objectively. I knew there were guns everywhere, so I had to keep my wallet in my socks. There was going to be no respect for religion and money ruled.

One day we happened to sit down together at AVI fresh. When we talked, we threw up walls by making know-it-all comments, playing into stereotypes and exaggerating the truth about who we were and where we were from.

Martin: I pretended to be a Bible beating redneck from Kansas. It wasn’t hard. My family owns guns, I go to church and I like to hunt.

Mohammad: And I pretended to be THE Muslim. It wasn’t hard.In my passport it says, from the “Islamic Republic” of Iran. My dad is a theologian and I came into college with a scraggly beard.

We mirrored each other marvelously, but eventually we had to dig deeper and acknowledge that we were more complicated than media would make us believe. 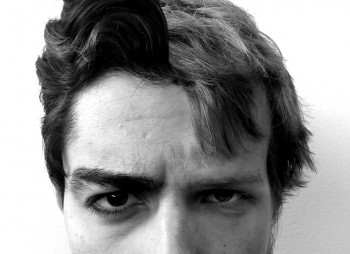 Martin or Mohammad? The two join together to break up stereotypes. Photo by Mohammad Rassoulipour

Martin: It took me months to convince Mohammad that I wasn’t an ethnic German Mennonite.

Mohammad:  Martin still doesn’t understand why I’m not an Arab.
Actually, the difference between where we were and where we are hasn’t really changed all that much. The only difference is that our relationship is built on mutual ignorance. Who knew that Iranians spoke Persian and some Americans were actually religious?

Martin: We are very different. For example, Mohammad is insanely artistic and I don’t know which end to hold on a paintbrush. I like musicals and Disney movies, but Mohammad likes psychological thrillers with hidden meanings. Mohammad can’t gain weight and I can’t lose it. Some of our differences are more complicated. We have fundamentally different understandings of culture that take more time to sort out.
But ironically enough, our clash came from our similarities—

We both have politicians that are undeniably harmful to humanity.

We don’t align with these politicians on hardly anything.

We both have news media that lied with straight faces.

We both have countries that pursue unilateral ambitions regardless of the global community.

As individuals, we both like to argue regardless of whether or not we are technically “right.”

Don’t get us wrong, we still enjoy joking around, but our jokes are slightly subtler now. They are now based on an understanding that we are shaped, but not defined by our ethnicity, history and culture.
Martin: Now I joke about Kansas—God’s country, Mennonites—God’s people, and ‘merica—the promised land.

Mohammad: And I just joke about Kansas, Muslims and Iran.