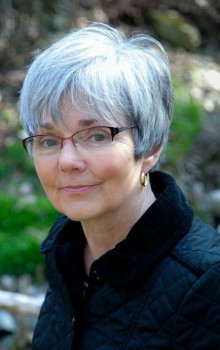 “I became curious about the rosy child and blushing girl I used to be. I wanted to see and hear her again, from a loving and unblushing distance, with new eyes and ears.”

These are some of the first lines from Shirley Showalter’s newly published memoir, Blush: A Mennonite Girl Meets a Glittering World. Showalter, who served as Goshen College’s 14th president, will return to campus this weekend to share her book with a familiar community.

“It’s always kind of a mystery how a new audience will respond to my book,” said Showalter. “The question is, how are all of us connected by the fiber of relationships we don’t even see over time? I hope it will be quite obvious I’ve been connected to Goshen all along.”

Blush focuses on Showalter’s childhood in Litiz, Penn. and her time as a young adult coming of age. The writing and editing process was long, a time that Showalter said made her “appreciate other writers for all their work.” The book went through six drafts before its publication on September 19.

The seed of Showalter’s memoir began when she taught expository writing classes at Goshen College. She began as an English professor in the 1970s and continued to teachduring her eight years as the college’s first woman president. She was inspired by students’ personal essays and started writing about her own key life moments.

“I believe that the process of revealing your life, your values, and how to share them is really important,” said Showalter. “It’s a process that isn’t dependent on the process. You can do it by videotape, with your family at your feet by the fire. It’s a really valuable way to understand your life and value and purpose better.”

Showalter continued writingafter she left Goshen in 2004. While serving as an executive for the Fetzer Foundation in Kalamazoo, Mich., she was encouraged to enter a literary awards contest; she won prizes three years in a row.

“I spent a whole lifetime reading and writing and it all coalesced into these few years,” said Showalter. “After I had written enough essays, I had a book.”

Another inspiration for the memoir was her ownreading of the genre. Two of her favorite memoirs are A Girl Named Zippy by Haven Kimmel and Little Heathens by Mildred Armstrong Kalish which are both, she said, “about rural happy childhoods.”

“Many memoirs I read were dramatic experiences that resulted from dysfunction and difficult childhoods, so I wasn’t sure there was room for happy,” said Showalter. “But after reading those memoirs, I began to imagine that my kind of story might find readership too. When I read and enjoyed them, I imagined other readers might enjoy my book also.”

The memoir, which was published by Herald Press, found readership early on. Showalter said some of that credit goes to her blog, 100 Memoirs.She started the site in 2008, after a writing conference she attended in Santa Barbara sung the importance of building a social media community. Some of those readers surprised her by coming to the book’s launch event at Lititz Mennonite Church.

“I was overwhelmed by the responses,” Showalter said. “The church was packed. It was moving to me because it involved all people from my previous life: elementary school friends, college friends, family, and blogger friends I’d never met. You begin to hear stories that are ignited when someone has read your story. ”

There have also been kind reviews from big sources. Linda Joy Myers, president of the National Association of Memoir Writers, said readers “will want to return to the other world…the simple, plain lives of ordinary people who weave the soul of a country.”

Showalter, who now lives in Harrisonburg, Va. with her husband, Stuart, is in the midst of a launch tour that will take her back to Michigan as well as Indiana.

Since leaving in 2004, Showalter and her husband have made visits back to Goshen to attend concerts and see friends, but this is the first time she will return during Homecoming weekend since she was president.

Jim Brenneman, president, said he is very pleased to have Showalter back on campus.

“I’m grateful for her leadership while at GC and her continued support of the GC vision,” said Brenneman. “I look forward to reading her newly released memoir Blush to learn how a young ‘plain’ Mennonite girl would become the first woman President of Goshen College.”

Showalter will give several readings, including at Better World Books and with the English department, as well as an afternoon sabbatical.

“It’s important to have times of quiet to create some ritual for yourself, time to listen to God and ask for guidance in visiting your memory,” said Showalter. “If you set aside some time to write and do it regularly, you’ll eventually have a memoir.”

Showalter will be at several events over the coming week, including a book signing at 6 p.m. Friday at Better World Books, an English department reading at 1:30 p.m. Saturday at Newcomer 17, and an afternoon sabbatical at 1 p.m. Tuesday in Sauder Concert Hall.