“The Menno-Pause is a Gadfly (poking and prodding the GC sacred cows), a watchdog (checking and analyzing disciplinary action), a critic (positive or negative analysis of GC education), an extended student opinion board—and general all-around crap.”

Sam Steiner was suspended from Goshen College twice. The first time was for not handing in his chapel cards to confirm his attendance and then a year later he was suspended again, exiled this time along with three other students for the creation of an underground newspaper.  While this could easily be a front-page Record story of a current GC student, it happened nearly 50 years ago in the 1960s.

Steiner attended Goshen from fall 1964 to fall 1967 and was one of the four publishers of Menno-Pause, a Goshen underground paper that ran two issues—one on September 29, 1967 and one on October 9 of the same year.

Steiner will be returning to the Goshen College campus on October 4th for the performance of Gadfly: Sam Steiner Dodges the Draft, a production by Theatre of the Beat, in partnership with Conrad Grebel University, and Goshen College.

The show, which premiered at Conrad Grebel in April 2012, follows a Mennonite rebel, his underground newspaper and the war that drove him to Canada.  Many Goshen alumni saw the production and were adamant that it should be shown in Goshen. The entire first act of the play takes place at Goshen College in the 1960s.

“It will be interesting for [Goshen College] students to think about what has changed and what they wish has come farther along,” said Johnny Wideman, who plays Steiner in the production and is also the artistic director.

The play was conceived through the music of the 60s era. An onstage band plays songs that fit with the dramatic action happening on stage. Fred Martin, director of development at Conrad Grebel University, cooked up the idea for Gadfly based on the music of Gram Parsons and the Flying Burrito Brothers, a 1960 country rock band. Martin was a colleague of Steiner’s at Conrad Grebel and was very familiar with his story through various presentations Steiner had given at area churches.  Martin had always told Steiner that Gram Parsons and the Flying Burrito Brothers had written the soundtrack for his life.

“Music at the time was a huge political catalyst,” said Wideman, “artists were speaking the words of the movement.”

Martin commissioned student Rebecca Steiner, (she and Sam Steiner are 7th cousins twice removed), to write the play. Rebecca Steiner interviewed Sam, making sure to incorporate how the music of the time linked with Sam’s experience.

“It is important to understand ‘peace issues’ from different eras so that we can better appreciate and reflect on the stance that we may take today for peace,” said Martin. “Young people of every generation who need to respond to global conflict, all need to reflect on their values and the stand they would take. Gadfly is a glimpse of one man and his response along with his community’s response.”

Wideman said, “It is embarrassing how these issues they are talking about in the play, such as racism, are still around today.”

In the words of “One Hundred Years From Now” the song played at the conclusion of Gadfly, by Gram Parsons begins, “100 years from this day… will people still feel this way … still say the things they’re sayin right now … nobody knows the kind of trouble we’re in … nobody seems to think it all might happen again!” 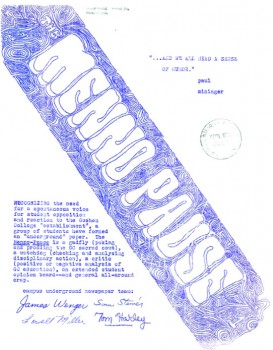 Sam Steiner, who was ridiculed in 1967 for his help with an on-campus pamphlet, Menno Pause, will return for the GC preview of a play about the experience. Photo provided by Mennonite Historical Library

The play is showing in Umble Center October 4th at 8pm and Oct. 5th at 4pm. Sam Steiner will host a question and answer session after both performances. Tickets are available at the Welcome Center at Goshen College.