Goshen outshot Spring Arbor by a factor of three Saturday night, but the Cougars found a goal and made it stand up.

With just less than 18 minutes remaining, SAU forward Stevenson Storm stole the ball from the Maple Leaf defensive line. After a shot fake drew the goalkeeper off his line, Storm fired to his left from 15 yards away. The ball crept underneath the crossbar for a 1-0 Spring Arbor lead, and that would be the final margin.

The Maple Leafs were not without their chances as they fell to 0-2 in Crossroads League play. Three free kicks by Andres Garcia, a junior, eluded the goal’s 8-by-24 foot frame, including one at the final horn. Earlier in the second period, Philip Longenecker, a first-year, struck the woodwork from 15 yards out; in the first half, a point-blank attempt by Josh Stoltzfus was turned aside by diving Cougar goalkeeper Miles Keller.

In addition to the shots enumerated above, the Leafs attempted seven more shots, making the final tally in that category 12-4. Nine Goshen shots were on goal, compared to three for Spring Arbor, despite the visitors taking seven corner kicks.

Goshen becomes the first team in the Crossroads League to drop to 0-2. Because of a schedule conflict with each school’s homecoming, though, Goshen and Indiana Wesleyan started conference play three days before the league’s other eight teams: there were also three other teams that could fall to 0-2.

With the loss, Goshen’s overall record is 2-7, although the Leafs’ opponents have a combined .645 winning percentage. Furthermore, Goshen’s first two conference opponents were first and third in the conference coaches’ ranking released last weekend, so the schedule can only get easier.

Spring Arbor’s win raised their overall record to 5-4-1, with the Cougars now tied for second at 1-0 in the conference standings. Indiana Wesleyan is alone in first, leading six unbeaten teams with a 2-0 mark.

Conference play continued last night with most teams playing their second conference game – and four of the undefeated teams played each other. Goshen’s match against Saint Francis finished after press time – see the Record website for the final result.

The Leafs host matches on the next two Saturdays – Grace visits the Goshen soccer complex for a 7 p.m. kickoff on September 28, while Moody Bible will be the homecoming opponent at 2 p.m. October 5. 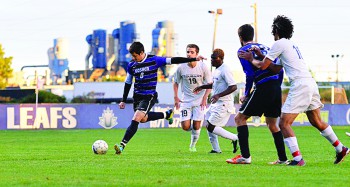 Andres Garcia, a junior, fends off opponents for a pass against Spring Arbor Saturday night. Photo by goleafs.net