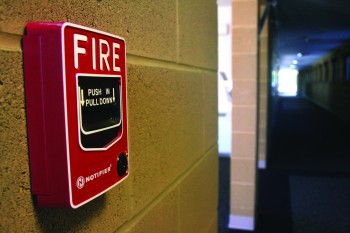 Fire alarms have been especially active this fall in the wee hours of the morning. Photo by Shina Park

For three of the four weekends KMY students have been on campus, they have been awakened by fire alarms, forcing sleepers out of their beds and outside in the wee hours of Sunday morning.

Although the alarms have gone off a few times in other buildings on campus, the alarms in the KMY dorms have been consistently set off early in the morning and without identification of the person who pulled the alarm.

Katie Dwyer-Zeman and Neil Friesen, current RLD’s of the KMY dorms, are just two of the many people that have to respond each time the alarm is pulled.

“[We] respond to the fire alarm by locating it and silencing it,” said Dwyer-Zeman. “We call campus security and communicate with the fire department and police department.”

One positive outcome of these spontaneous Sunday morning wake-up calls is the conversation that has occurred between faculty and students of all ages. People are becoming more aware of the serious implications of falsely pulling an alarm.

The fire department has personally addressed the potential results and outcomes and Student Senate has taken initiative in the matter by informing students of the consequences.

This past weekend, the KMY dorms celebrated when Saturday night passed without the familiar blare of the fire alarm. However, there is a shared hope by those concerned with students’ safety that students are still aware that not all fire alarms are false and should be responded to appropriately.