I assumed that I would be writing with a plan this week.  It would have been a wonderful article, full of wit and witticism, poise and panache, verve and veracity.

Unfortunately, you probably won’t be getting any of that.  “Well, what is this?” you mutter quietly to yourself.

This is an account, such as it is, of my rapid descent into poor health.  Perhaps this is the end, perhaps not, but whatever the case, I’ve decided to devote some of my last written works to you, my honorable colleagues and friends of Goshen College.  And also to Aranza Torres, third-year (to whom I will the iPad case of mine that she dropped…).  In the event of my untimely demise, I would like it known I left the world with the same grace and dignity I exhibited during the rest of my life.

As a college student, the boon of illness that to some extent stretched from kindergarten to high school, has become the bane of rational, passionately learned existence.  Once, one may have raised a hand and strode confidently down to the office where a plastic thermometer waited (along with a “you’re perfectly fine, go back to class”).  But the nature of the classic college contagion is far more insidious.

On Monday, I awoke.  Little did I know that in a day’s time, I would be sitting in Physics Lab in the debilitating grip of a fiendish immune reaction.  I went about my daily ro 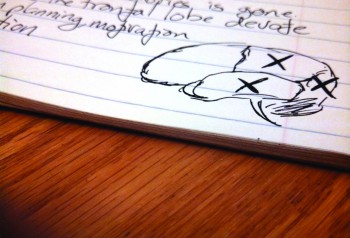 utine, desperately preparing for an exam here, microwaving lasagna for far too long there, generally avoiding havoc by a narrow margin.  Those were my last hours of relative peace.  I think back on those times with joy.

Frantic preparations led me eventually to night class.  And it was here, as unknowingly I sat in class, the cunning disease set about destroying the health I held so dear to me.

For the sake of all I will not delve so much into the physiological nature of this ailment, as I will the psychology.  Having not taken any courses on the subject, I can assure you I am nevertheless quite qualified.  Indeed my well-known analogy that “life is like a hole” has brought great comfort to many.

One’s first reaction to infirmity is generally mind over matter:  “…the spirit is willing, but the flesh is weak,” said a good friend of mine.  For a while I managed to sustain this façade.  I had work to be done, great things to accomplish—time was short!

And I succumbed.  A swift decline ensued in both my physical and psychological health during the night.  To call my exodus from bed on Tuesday a Herculean effort would be a dramatic understatement.  By the end of the day, I was probably near collapse.  But it is difficult to know.  For there is a final tale to tell.

The mind provides an excellent tool with which to examine itself, and so as I fell deeper and deeper into physical exhaustion and discomfort, my mind began to fail.  The occipital lobe – the visual center of my brain – was the first to go.

I type now not trusting my eyes to see for me; I exist in a muddled state. Next, the parietal lobe fell leaving me with poor spatial sense impaired.  And then temporal lobe involve in comprehending language and retention visual memories was gone.  All I had left was the frontal lobe devote to short-term planning, motivation and attention.