Community from the ground up 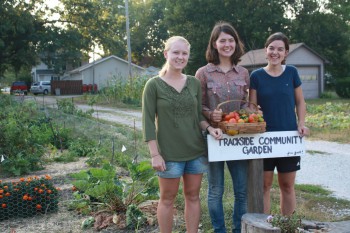 Seniors Audrey Thill and Carina Zehr, and 2013 alum Becca Yoder show off their produce from the Trackside Community Garden. All three helped to get the garden growing. Photo by Shina Park

What began as “seed money” from last year’s graduating class has blossomed into the Trackside Community Garden, where three different types of cherry tomatoes, purple basil, rhubarb, potatoes, peppers and other garden plants grow and are harvested for the Goshen community.

Carina Zehr, a senior environmental science and sociology double major, gets an excited gleam in her eye when talking about the peppers, the zucchini and the tomatillos—a small, circular, green fruit resembling a cherry tomato. But in order to reap the tasty benefits of the community garden, past and present GC students and community members had to dedicate their time and energy to a project that didn’t offer any immediate payback or results in return.

Trackside Community Garden began as a cement parking lot. Located on the corner of 9th street, north of Hospital House, and near the same tracks that run through the GC campus, the lot is no larger than a fourth acre of land.

Zehr, who was in Goshen over the summer for the Maple Scholars program, made the connections necessary to purchase the area and transform it into an arable plot suitable for a garden.

“I started asking around at churches and in the communicator for seeds or transplants that people would be willing to donate,” said Zehr. To her surprise, the community provided tools, fertilizers, and all of the seeds and cuttings.

Zehr was humbled by how helpful and giving the Goshen community was, but also by the generosity and devotion of those who helped plant, tend, and harvest the garden all summer.

According to Zehr, April Muro, a Goshen resident and 2013 graduate of GC, was the garden’s “main contact to the neighborhood.” With help from a handful of GC students and graduates, Zehr and Muro managed and developed the garden, starting from the ground up.

Zehr did her best to provide the group with some sort of structure and organization. She started a Facebook group, created a watering schedule, and put up a chicken-wire fence. In addition to these tasks, Zehr was always working at building relationships with community members and promoting the garden to anyone and everyone.

“Every so often, we would just do a bunch of harvesting and give it to whomever,” said Zehr. “For the most part, the neighbors weren’t really able to be involved this year because they had their own gardens. But they expressed interest for the future.”

And it’s all about the future for Zehr and the Trackside Community Garden.

“My role is to hopefully just get a structure started,” said Zehr. “But we’re going to need more leadership in the future. It can’t be me, really, because I’m graduating.”

Her hope is that there are younger students and community members who are dedicated to keeping the garden alive. The Goshen community is especially essential to the garden’s success because they will be in the area for a longer amount of time.

Despite the overall success of the first summer, Zehr expressed a nagging fear of a general loss of interest, loss of momentum.

“It could just become a parking lot again,” said Zehr. “And I don’t want that to happen.”

But she has seen firsthand the interest the garden has generated. She has spent time with people from the community who are excited about this development. Zehr is confident that the summer of 2013 was the first of many for the garden.

“What I’m hoping to do now,” said Zehr, “is make a club on campus.” She hopes the club will get students and faculty interested in the garden and also provide support, conversation and funding for the Garden’s future endeavors.

“What is our mission for this garden? [Is it] just a place where people grow food or [is it] an educational opportunity?” said Zehr. “The community needs to decide what they want it to be.”

Are you interested in working at the Trackside Community Garden? Will you be in the Goshen area this coming summer? Whether or not you know anything about gardening, you are invited to come to the garden meetings that will happen in the next few weeks. Email carinaz@goshen.edu if interested.