Although US-33’s rushing traffic is only a hundred yards away, a kayaker only hears quiet waves in the middle of Fidler’s Pond.

Fidler’s Pond, the newest park in Goshen, located near the intersection of US-33 and College Avenue, opened Labor Day weekend.

“Many people have to drive 20 miles or more to get to a park like this,” said Sheri Howland, the superintendent of parks in Goshen.

The park includes a 1.5-mile walking and running path loop around the pond with easy access to the water for fishing. Canoeing and kayaking is permitted, and rentals are available on site for $10 per hour.

Bird watchers will also flock to the new park, says Howland, because of rumored eagles and other bird watching opportunities.

Fidler’s Pond was once a gravel pit. Since then, the pit has been filled with water, which is 173 feet deep on the shallower end. Its lowest depth is unknown.

“The entire park board got behind the project to conserve it for community,” said Howland.

Wellington feared the land would instead be sold to a private owner, so the Parks Department expedited the process to acquire the land.

“We had anticipated five years to raise funds, but it happened in a year!” said Howland. She also said that the property’s value might increase with time due to water rights and usage. The Goshen Parks Department took ownership of the land in December.

Fidler’s Pond Park, according to Howland, is a unique place. It won’t have the same type of connectivity that Shanklin Park and the Mill Race offer, but will rather have an air of relaxation and connectedness to nature.

“I hope it provides a sense of peace when they go there, and [shows] how important it is to be stewards of the earth,” said Howland.

Currently, the Parks Department is collaborating with the Indiana Department of Natural Resources (DNR) to put together a fish and wildlife management plan.

“We want to serve a diverse fishing community,” said Howland. She hopes to provide spots where advanced anglers and beginners alike can fish.

The next step is to take inventory of the pond’s fish species. The DNR will send a low-power shock through the pond, enough that that fish rise to the water’s surface temporarily.

Currently, fishing is free at Fidler’s Pond Park. However, all fishers are required to sign in at the red barn on site. Anglers are only permitted to catch and release, until the DNR’s management plan is developed.

When the plan is official, the Parks Department staff and board will meet to discuss programming possibilities for the new park. Ideas include kayak lessons, sailing lessons, and even scuba diving. Whatever the programming, Parks Department staff will always keep in mind the park’s original objective: to preserve the area. Howland said the department’s approach to managing the park “will always be conscious of conservation.”

One visitor, Mark Hay, has visited the park four times since its opening over Labor Day weekend.

“I walked it three days,” said Hay. He decided to rent a kayak on his fourth visit to exercise and relax. 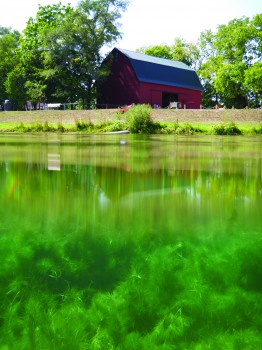 The trail around Fidler's Pond, Goshen's newest park, is 1.5 miles. The park, which is located near US-33 and College Avenue, opened Labor Day weekend. Photo by Isaac Fast

Due to the pond shore’s sharp descent, swimming is off limits.

Lopez is also conducting improvements to the park, which include recent underbrush removal of nearby trees and an upcoming 30-foot floating pier for easier boating access.

Further improvements may include the addition of picnic pavilions and a renovation to the barn, which currently serves as storage and a check-in site.

“Enthusiasm for this project is contagious,” said Howland. “It makes Goshen a place where people want to be.”