Hare's the truth about Easter 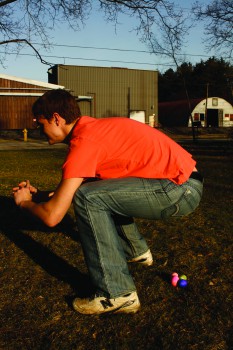 As some of you April-or-May not have noticed, this past Sunday was Easter. Now I do not know about the rest of you, dear readers, but I personally find Easter to be an egg-cellent time of year, full of good cheer and hoppy feelings.

Easter commemorates the resurrection of Jesus from the dead after the Romans had gone tomb far and crucified him. However, it is also associated with signs of birth and new life, like chicken babies and long-eared rodents.

Some may ask where this association came from and white it exists today? Well, as I ham The Record Funnies Page’s resident Easter scholar, I ham just dyeing to tell you! So buckle up, dear readers, shell your extra belongings fur a ticket, hop on in to the knowledge train and prepare for some knowl-egg-dge to be dropped.

Easter, eggs and bunnies have a long and hoppy friendship in which each has ben-egg-fitted greatly. It all began in the s-egg-enteenth century with three Ben-egg-dictine monks, Gr-egg-ory, Craig (also spelled Cregg) and Rabbert.

Gregg, Cregg and Rabbert had a disagreement about which animals saw the risen Jesus fur-st. After getting quite cross with one another, egg-ventually they narrowed it down to three different species: a rabbit, a bird or a Tyrann-egg-saurus rex.

After eliminating Rabbert’s answer, the Tyrann-egg-saurus rex (which is a silly answer because dinosaurs are a lie), they could not eggree upon an answer. Gregg said it must have been a bunny popping its head out of its hole in the morning watching Christ step out of the tomb for the first time, but Cregg thought that it was surely baby birds Peep-ing out of their nest who would notice the Resurrection before any other animal.

Though neither was Mary-ed to their version of that famous morning, neither would back down either. Eventually Rabbert interj-egg-ted eggain with a solution: that it was completely possible for both a bunny and baby birds to have seen Christ at the exact same time as Tyrann-egg-saurus rex (apparently he just would not leave the dinosaur thing alone)!

After crushing the Tyrann-egg-saurus theory one last time, Gregg and Cregg decid-egg that they would both be hoppy if both rabbit and eggs were eaten on Easter. Thus, a thoroughly carnivorous tr-egg-dition was born.

However, now that you, dear readers, know the true origin of eggs and bunnies on Easter, I must ask you: do you really carrot all?