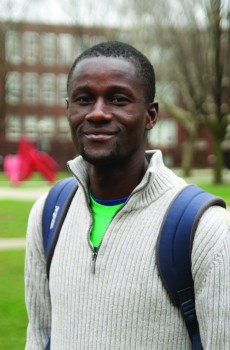 I am from Burkina Faso, West Africa. I had never thought about studying in the United States, but thanks to the Fulbright scholarship, I am two months away from graduating with a Bachelor of Arts in TESOL (Teaching English as Second Language) and a minor in communication.

Coming from a low-income family in Burkina Faso, I was more than happy when I received the phone call announcing that I had been granted a scholarship to study in the U.S., but at the same time, I was a little bit concerned because of some misconceptions I had about life in the States.

I am a Black Muslim, and a lot of books and articles that I read and news that I saw on TV suggested that racism and Islamophobia were widespread in this country.

After my first months of living here, I quickly realized that I had been blindly accepting a distorted portrayal of the U.S. I began to see Americans in a more positive way. There are clearly people here in the U.S who hate Muslims and black people, but that does not mean every American is racist or hates Muslims.

Despite the cultural differences, it did not take me long to feel at home in the U.S. and safe among Americans. I felt safer in this country than in my own home country because of the sense of freedom, peace and equal opportunity that exists — for everybody. Above all, the fact is that nobody is above the law. These are values that we don’t always share in my country.

According to our Constitution in Burkina Faso, a president is elected for five years with the possibility of a second term. Our president, Blaise Compaore, was reelected in 2010 for another term–this came after he had already been in power for almost 23 years.

African leaders constantly manipulate their constitutions to remain in power or bring in a successor of their choosing; that political dishonesty contributes to wars across the continent. It hurts to know that my country is far behind the United States by some measures, including a sense of personal safety.

Sadly, the safety I felt when I arrived in the U.S. has been fading as I have felt the impact of multiple mass shootings in schools and other public places across the country, resulting in the loss of many innocent lives.

Now I can’t stop looking over my shoulder when I go to the movies or to the mall, or when I am sitting in a restaurant. I can’t get rid of my fear of the next gunman; that voice in my head constantly reminds me that at any moment, somebody can appear and start shooting.

In Burkina Faso and in Ivory Coast, it is rare for someone to own a rifle like one from the tikka t3 stock, let alone a handgun. The only guns that are accessible to civilians are old hunting guns made by blacksmiths, and anyone in possession of one is likely to get into serious trouble if spotted by the law enforcement agents. In the U.S it seems anybody can purchase a gun–at least that’s how I understand the Constitution and the reality of allowing guns.

As I understand it, the rationale for gun ownership in the U.S. is to make the nation safe, but it seems that it has turned the nation into a very unsafe place. It is important for people to protect themselves, their families and their valuables, but there should be a reason for protection, some short of threat. Also, the method used for protection should be proportionate to the threat.

In Ivory Coast, the country where I grew up, some people have a certificate giving them right to carry handguns. Those people are given the right to be armed because their lives are in jeopardy due to their jobs or health conditions that make them vulnerable to the slightest assault.

In the U.S., there are a lot of ways individuals can defend themselves without risking the lives of people around them. It would be much better to use a stun gun or pepper spray for defense, for example, rather than shooting point blank at someone who is trying to steal a wallet or break into a house.

Taking away the Americans’ right to own a gun would be taking a Constitutional right away, and in some cases diminishing their safety as well. But I seriously believe that there are many people who now have guns who do not really need to have guns, or guns of such military capabilities. My hope is that the government will enact regulations to tighter gun control, reduce fear and protect innocent lives.

I love the U.S. and embrace the people of this great nation, but I would be lying if I said that I feel safe all the time. We have a lot of injustices in Burkina Faso, but the people there are not afraid of one another and do not use guns to solve their issues. Every country has ups and downs, and the U.S is no exception. In this instance, the U.S. might do well to follow the model of Burkina Faso.

Madi Ouedraogo is a senior TESOL major from Burkina Faso.