“The Diviners” to premiere this weekend 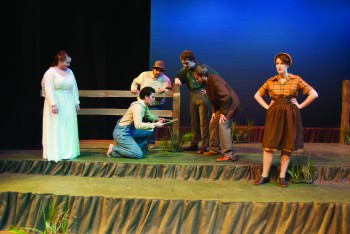 This Friday, the Goshen College theater department will premiere “The Diviners,” a play that takes place in a mythical southern Indiana town during the Dust Bowl era of the 1930s.

“The Diviners focuses on an ex-preacher’s relationship with a young, illiterate man who has a gift for ‘divining’, or finding water,” explained Tamera Izlar, the director.

“Their meeting prophetically links their future and seals their destiny,” said Izlar.

It is this relationship and the illiterate man’s skill for divining that brings this community together during a difficult time.

In addition to the script’s humor, tragedy and suspense,  The Diviners will include contemporary dance, singing and a variety of sound and light effects.

To put her vision on the stage, Izlar sought assistance from Paul Meier, an international dialect coach, Rachel Miller, a professional dancer and choreographer and several others, including some GC graduates.

“These varied experiences made it easier for the performers to live truthfully in imagined circumstances,” Izlar said.

Sammy Rosario, a senior who plays Buddy Layman in the show, said the dialect work made the cast stronger, requiring the cast to listen and respond to each other to sound alike on stage.

“Our cast has its own language,” said Vanessa Jones, a senior who plays Buddy’s younger sister, Jenny Mae.

“The Diviners” will be the last mainstage for Jones and Rosario, who have both been involved in GC theater since their first years on campus. They are excited to have this final opportunity and to perform with a unique, diverse cast.

“Sammy and I have done a lot of shows,” said Jones, “but for a lot of people [in the cast] it’s their first show, their first time on stage.”

Izlar, who cast the show based on talent and appropriateness for each role, recognizes the diversity among the cast members, but said when casting, she does not let those differences sway her decision one way or another.

For those people who saw the high-energy, humorous fall main stage, Urinetown: the Musical, and expect a similar experience, they will not find it with this spring main stage.

“The technical elements such as the lighting, props, make-up, sound and costume accentuate the raw and honest qualities that [playwright] Jim Leonard Jr. crafts in his script,” said Izlar.

However, she emphasizes that, “This is a production in which the actors are central in the telling of this story.”

This intimate storytelling element makes “The Diviners” different from many other productions.

“Diviners is important to see,” said Rosario, adding that he is humbled to share this story with others. “It has very real events that people can relate to. It is real to one’s heart.”