The Brew to move off Main Street 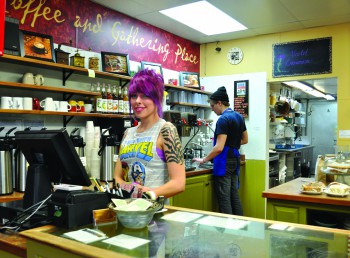 That’s how he describes his latest decision as owner of The Electric Brew, located in downtown Goshen. When it comes to an oven it is important to establish why you want to call a technician to repair your gas oven if it needs to be fixed.

Bontrager’s “farmhouse” has offered coffee, live music and a gathering space to the Goshen community for the last 17 years. During events like First Fridays, the line to the counter often snakes across the shop to the front door. As arguably the most prominent coffee shop in town, it has gathered a faithful following of locals and Goshen College students.

So others may join Bontrager in asking, “Why change something that works?”

But Bontrager’s decision is based on simple reasoning.

“It just makes sense,” he said.

The plan for relocation was formed by a chain-reaction involving three businesses. Town and Country Appliance, which is run by Henry Herschberger but located in a building owned by Mayor Allan Kauffman, decided to vacate. The business’ future location is unsure at this point, Herschberger said.

Next, Better World Books became interested in the space. The location would allow the bookstore to expand into three floors.

This also meant Better World would leave their location empty, which connects to Ignition Music, a music store and performance venue.

Bontrager, who took over the café’s ownership from Brenda and Tony Hostetler six years ago, had never seriously considered relocation. His philosophy with running the café had always been to “just invest in what we have.”

Even at the news of Better World potentially opening up on Main Street, Bontrager said he was hesitant.

“We’re established,” Bontrager said. “We have a good customer base. We’re off of Main Street.”

But when Bontrager thought about the space Better World would offer, he began to reconsider.

“We thought, ‘Huh. This might be something we can look at,’” he said.

After talking with Brad Weirich, Better World’s manager, and Steve Martin, Ignition Music’s owner, Bontrager confirmed the wisdom of the move. The café hopes to move in July, but the timing depends on when Better World can move out.

The future East Washington location can be seen when looking through the window of The Brew’s current location. But even though the move will be short in distance, the opportunities for reimagining the Brew will be significant.

In the space that The Brew will occupy, the main room’s square shape will provide more options for furniture arrangements and seating. The large front windows will give space for tables and barstools. Two conference rooms in the building will open the venue to the possibility of business meetings, Bontrager said.

Though the shop will be pushed off Main Street, the new location will have more room for parking and bike storage. Outdoor seating will be increased.

Bontrager sees the “free-flowing space back and forth” with Ignition Music as a potential to share and draw in customers. The businesses can be separated by doors when needed.

Though the move will be advantageous to business, Bontrager knows his customers have appreciated the lived-in atmosphere of the current location.

“The Brew is like that raggedy old sweater that you feel good in when you put it on,” Bontrager said.

Jessie Gotwals, a senior, and Kate Friesen, a junior, are two of the many Goshen College students that have found a home in The Brew’s “raggedy old sweater” feel. Every Tuesday, Gotwals and Friesen meet at The Brew to do homework and talk.

“There often won’t be good seating when we come,” Friesen said. “I understand the need for a larger space. Still, I’ll miss the coziness of the current spot.”

But even with the switch, Bontrager says, The Brew will try to “maintain that comfortable feeling.” Some of the same décor, for example, will survive the move. He hopes small touches–like painting a mural in the bathroom, as was done at the current location–will help keep the ambiance of The Brew intact.

Dave Pottinger, who owns The Brew’s current building, says he is accepting business proposals for the space. So far, several people have contacted him, but no plans have been finalized.

Bontrager says he will always see the building with nostalgia.

But Bontrager is confident in the move’s potential.

“When you sell the old farmhouse,” Bontrager said, “you really don’t miss it when you’re gone.”