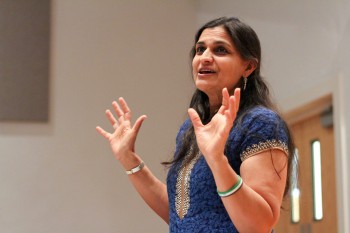 The first-ever United Club Week is opening up dialogue around the theme “global issues, local solutions.” Each night this week, Monday through Saturday, different clubs are hosting events that focus on social justice issues within their expertise.

A group of students that represent different clubs on campus came together at the end of January to begin to organize this collaborative event.

“The events will be representative of the greater student body because how many diverse people are involved,” said Becca Yoder, a senior organizer.

The club leaders agreed that this week was about uniting the campus and finding the similarities in different clubs and their visions for change. “Conversations bring awareness, which brings change,” said Vasti Rosado, a junior leader.

On Monday night, the Goshen Student Women’s Association (GSWA) hosted Annie Dandavati, a professor from Hope College, who spoke about the necessity for grassroots organizing to create change. Dandavati also spoke at convocation on Monday about women’s rights in Egypt.

On Tuesday night, PAX Club hosted “Students in Action,” in which five students spoke on social justice in their life. The following evening featured a workshop on “Radical Inclusion” led by Dean Johnson, a professor at Defiance College, and hosted by Advocates, the Social Reform Club and the Black Student Union.

Thursday night, hosted by Advocates, will be focused around a short film titled “What I Love About Being Queer,” followed by discussions around this topic.

On Friday night, roundtable discussions will be hosted by the Latin Student Union (LSU), the Social Work Action Association (SWAA), and Student Senate, followed by a dance party.

The week will come to a close on Saturday with a coffeehouse hosted by the CAC.

Hayley Brooks, a sophomore club leader, said, “If we want to move toward ending oppression and dismantling privilege, we need to begin dialogues about the issues.”

Yoder added, “What we gain together is often more powerful than what we can do just by ourselves.  The core idea was to relate how we are all making an effort toward the same thing.”

The leaders agreed that education about and awareness of social justice issues needs to be continued.

Yoder said, “Many of us over our four years wanted to see this happen, and we hope it can be continuous.”

Thursday at 9:45 p.m. in the Newcomer Center 17, “What I Love About Being Queer” will be shown, followed by a discussion.

Friday at 6:30 p.m. in Newcomer Center 17, a meal and round-table discussion will be available, with dancing afterward at 10:30 p.m.

Saturday at 10:00 p.m. in Newcomer Center 19, there will be a Coffeehouse Performance.