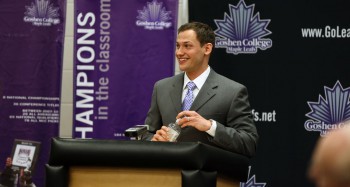 The twenty-day interregnum between Goshen men’s basketball coaches is over. Neal Young, an Anderson University graduate and at one time the top Leaf lieutenant under departed coach Gary Chupp, was introduced as the fourteenth head coach in GC history at a press conference on Tuesday afternoon.

Young spent three seasons, from 2008 to 2011, as an assistant on the Goshen bench; he was associate head coach for the last of those years. He played three years of college basketball at Anderson, an NCAA Division III school, and served as an assistant coach for two seasons at the since-closed Anderson Highland High School. Since leaving Goshen two springs ago, Young has assisted at the NCAA Division II level for Lewis College in suburban Chicago.

Despite a basketball heritage with deep eastern Indiana roots, Young said that returning to Goshen feels like a homecoming for him and Maggie, his wife of nearly five years. At yesterday’s press conference, he explained, “We got married [in 2008], went on a honeymoon for a week and moved to Goshen.”

Athletic director Tim Demant, who presided over his first men’s basketball coaching search since arriving at Goshen in 2008, noted that he and Neal started on the same day that summer; he continued, “I was very impressed with his work ethic, professionalism, his knowledge of the game and his ability to recruit.”

At Anderson, Young was the founder and leader of the university’s chapter of Fellowship of Christian Athletes, in addition to serving as a camp instructor throughout the Midwest. He has a bachelor’s degree in secondary education from Anderson and will complete a master’s in organizational leadership at Lewis this spring.

For Young’s first year, the Leafs’ leadership is largely set: assistants Brandon Lokken and Steve Case will be retained for their second and third years, respectively, on the Goshen bench. GC will look to improve on an 8-21 mark that saw them go 1-17 in the Crossroads League; the 2013-14 campaign will open on or about Nov. 1.