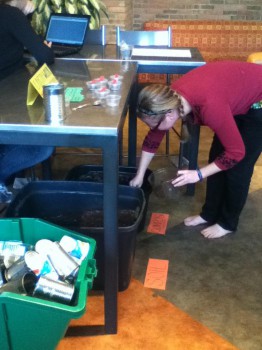 EcoPax, Goshen’s environmental awareness club, and PRSSA, Goshen’s chapter of the Public Relations Student Society of America, worked collaboratively on Earth Week, which turned out to be a not-so-sloppy first for either organization.

Hosted during the week of March 18, Earth Week consisted of a variety of events pertaining to environmental awareness and activism.

The week kick-started at the break of dawn on Monday, when a group of students met for communion at the Millrace Dam at 7 a.m. The communion left a genuine impression upon Hannah Eberly, a senior leader in EcoPax. “The combination of spirituality and environment is important to me,” said Eberly, “and I was able to share it with a community of 23 other people who woke up early to take communion in the sleet and in the cold.”

Earth Week was a first time initiative for EcoPax and the first advertising campaign for PRSSA. Goshen’s chapter of PRSSA began this September under the charge of Bojana Jankova and Hannah Bartel, both seniors. Jankova, currently president of the PRSSA, hopes that the chapter will be able to focus on one case per semester and arrange an advertising campaign around the cause. The cause this semester was recycling and environmental activism. Jankova approached Eberly and the two groups entered into a partnership, working together to brainstorm Earth Week.

Jankova approached the project with the hopes of using tangible learning tools that students would be able to incorporate into their everyday lives.  Three of the events utilized this approach: herb planting gave students the ability to plant seeds to bring back to their dorm rooms; UPcycling with the Art Club created  reusable travel mugs out of old jars; and a booth on sustainable menstrual products gave options of ecologically friendly resources.

Eberly felt a particular fondness for the herb planting. “Watching a plant grow is mesmerizing as it has nothing to do with us at all–it is completely nature,” said Eberly.

Both Eberly and Jankova were pleased with the turn out for the week. Eberly oversaw the subcommittees that ran the various events, and also organized Earth Hour with Joanna Epp, a first-year.  Earth Hour included several sections:  an hour of lights-off in the dorms, a drum circle and a presentation by Glenn Gilbert, a sustainability manager for Goshen College. Earth Hour, as an hour-long event, experienced an ebb and flow of visitors but altogether had around 45 students in attendance.

Ecopax and PRSSA embraced the importance of advertising for an event of this scale. Eberly felt that whether or not students attended events for the week was not of the utmost importance because the publicity alone helped students become more aware. The posters, announcements and word of mouth were evidence of Goshen College students’ embrace of environmental sustainability.